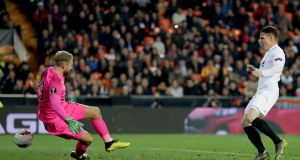 Valencia’s Kevin Gameiro scores during the Europa League round of 32 second leg against Celtic at the Mestalla. Photograph: Richard Heathcote/Getty Images

Celtic’s 16th European game this season was also their last. A journey that began with the Champions League qualifiers in Armenia on July 10th ended in the Europa League round of 32 in Spain seven months later.

It is their longest continental campaign since 2004 but they fell to a Kevin Gameiro goal, defeated 1-0 at Mestalla, 3-0 on aggregate, three months and nine games before the final. There is no reproach there, just reality, and there may be some satisfaction at emerging from their group, a sense of achievement at their performance at the home of one of the competition’s favourites.

A 2-0 defeat in the first leg always meant Celtic were likely to be eliminated here, but they will reflect that, poor though they were in Glasgow, this was miles better: a game, and maybe even a tie, that might have been different but for the sending off of Jeremy Toljan, which changed the second leg entirely shortly before half-time. Until then, Brendan Rogers’s team had impressed.

The 3,000 or so Celtic fans among the 36,000 inside Mestalla, and the many more watching from bars outside – having arrived to find tickets were not on sale – were defeated but had enjoyed much of what they saw.

Rogers had suggested that if Celtic scored the opening goal anything could happen. If the plan did not come to fruition it was partly due to misfortune. Celtic’s first shot had arrived inside the first two minutes, determined as they were to run at Valencia, particularly on the left where Republic of Ireland international Jonny Hayes advanced often from wing back, supported by Ryan Christie.

Callum McGregor twice burst from deep. And ahead of them Oliver Burke pressed: his first run took him off the pitch but that pace concerned the Spaniards. In the middle, meanwhile, Celtic settled and started to dominate possession.

Hayes won the corner from which Kristoffer Ajer hit a volley off Daniel Wass and then sent the rebound over. Soon after, Burke outran the Valencia defence but outran his team-mates too, left alone to fire off a shot that was blocked by Ezequiel Garay. And then Burke dashed deep into the area on the left, only to lose control and leave the ball behind. When Christie shot over soon after the half-hour and Hayes’s effort was sliced past the post a couple of minutes later, the Mestalla whistled – conscious not only that Valencia were being outrun but that they might even be at risk.

But then it happened: Toljan got a second yellow card for a foul on Santi Mina. As he walked he appeared to take Celtic’s chances with him, the pitch tilting the other way. As he went, the shot count read 0-8, although it was true that few had truly troubled Neto. Valencia’s first shot came on 41 minutes; within three minutes they had three more, Scott Bain pushing Dani Parejo’s deflected effort over the bar, Ferrán Torres flashing one just wide, and Bain again stretching out a hand, this time to deny Mina. This was different now.

In fact, it seemed it was over. Reality reimposed itself. It appeared all Celtic could do was hang on. What they hung on to, of course, was European elimination, albeit with pride.

Valencia kept coming but they only rarely created clear opportunities and a better chance fell at the other end, Christie’s inswinging free-kick after an hour headed over by Kristoffer Ajer from just four yards out. Ultimately, though, down to 10 men, the difference showed. Parejo clipped a marvellous ball to Wass, who cushioned his header into the path of Gameiro. He had only been on the pitch two minutes but it was long enough to end it. – Guardian