Goals from Neymar, Mbappe and Cavani secured result before half-time 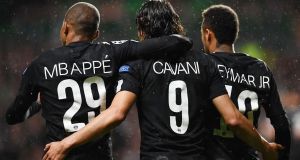 Neymar celebrates with Edinson Cavani and Kylian Mbappe after opening the scoring for Paris Saint-Germain in the Champions League game against Celtic at Celtic Park. Photograph: Franck Fife/AFP/Getty Images

Brendan Rodgers may bemoan the luck of the draw. On the evidence of a harrowing evening for Celtic, facing a Paris Saint-Germain side determined to deliver a statement of intent to open the Champions League was always going to be an insurmountable challenge.

Some context for Rodgers and Celtic will arrive with what PSG do next. Celtic, though, need to banish this French canter from their minds in preparation for what has always looked a pivotal Group B fixture at Anderlecht in a fortnight. Here, European football’s haves brutally exposed the have-nots to the point where the points were secure by half-time.

PSG’s front three of Neymar, Edinson Cavani and Kylian Mbappé – anxious to announce themselves as collectively the best in Europe – helped themselves to goals. The final tally for the visitors just about explains an on and off-field gulf. Too many of Celtic’s players didn’t perform to their capabilities – there were shortcomings in defence and the failure to retain possession elsewhere – but PSG’s play was a joy to behold.

Celtic’s shortage of defensive options meant a start for the 18-year-old Anthony Ralston at right back. This represented only his fifth appearance. For all this will inevitably lead to carping regarding the lack of depth of talent for an environment such as this, for Celtic to field an academy product in such a marquee fixture is in part testament to Rodgers’s fresh thinking. The simple move would have been to deploy a more experienced player but out of position. With Jozo Simunovic Celtic’s only fit and orthodox centre half, Mikael Lustig stepped inside to allow Ralston his start. Who was in direct opposition to the teenager? Neymar. It can only get considerably easier from here.

If Champions League places were awarded on the basis of atmosphere and spectacle, Celtic needn’t have to fret about arduous qualifying ties year on year. The deafening, spine-tingling level of noise as Zadok the Priest arrived as the standard precursor to a Champions League tie made visitors from all corners sit up and take notice. Celtic’s supporters don’t demand annual participation at this level; they do, however, relish every single moment amongst Europe’s elite.

PSG’s opening to the game was hardly a shock, their domination of the ball forcing Celtic into a style completely removed from the Scottish domestic scene. In a back-handed tribute to Ralston, the French team’s joy during those early exchanges generally came from the Celtic left. The hosts had to be more ruthless when afforded hope than was the case in the 10th minute, Olivier Ntcham shooting well wide from 25 yards when Patrick Roberts was in clear space to his right.

PSG’s next meaningful attack resulted in the ball finding Craig Gordon’s net, with an assistant referee’s flag denying Cavani the opening goal after he met a low cross from Layvin Kurzawa. Cavani bared his teeth again moments later, Gordon this time the match for his half-volley.

The harsh comment at this juncture would be to suggest Celtic didn’t heed the warnings. They had what looked a perfectly legitimate shout for a foul on Scott Sinclair as PSG claimed midfield possession. As Celtic protested, PSG marauded forward. Adrien Rabiot found himself goal side of Ralston, with the midfielder feeding Neymar. The Brazilian, already a pantomime villain in these parts after spats in the recent past, only angered the Celtic support even more with his composed finish over the onrushing Gordon.

Celtic almost responded immediately by virtue of a weapon which Unai Emery, the PSG head coach, had identified before the match. Leigh Griffiths conjured up a wonderful free-kick from more than 30 yards out, with Alphonse Areola leaping to supply a save of identical quality.

PSG doubled their lead with a goal which involved each of their celebrated front three but in wholly unorthodox style. Neymar was unselfish in heading Marco Verratti’s cross back towards Cavani, who promptly took a fresh-air swipe at the ball. The No 9 was spared ignominy by Mbappé at the far post.

Cavani notched number three from the penalty spot, five minutes before the break, after Simunovic pulled the same player’s shirt. PSG’s canter was all too much for one punter in a green scarf, who raced on to the pitch as Celtic were about to kick off before trying to kick Mbappé. Summing up the Celtic night thus far, he missed.

Celtic began the second half in bullish mood, a matter which had a positive impact on stadium atmosphere. And still, unfazed, PSG defended as if barely troubled while attacking at will. In Rabiot, they had a performer arguably more impressive than the forwards who will inevitably claim widespread attention. Rabiot’s removal shortly after the hour mark could have been described as an act of generosity, were his replacement not Julian Draxler. Neymar spurned a glorious opportunity for number four after 70 minutes.

Draxler triggered panic in the Celtic goal area with a cross, Lustig’s deflection succeeding where Neymar could not. Cavani promptly headed in a fifth from a seemingly impossible angle. Celtic are rarely routed at home; it will be of little comfort that the instigators look the real deal.