Northern Ireland manager stopped by police on Sunday night, according to reports 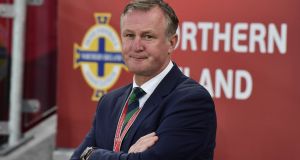 He was stopped by police on the outskirts of Edinburgh on Sunday, the Scottish Sun said.

A statement from the Irish Football Association (IFA) said it was “aware of an alleged drink-driving incident involving Michael O’Neill.

“As it is a police matter, the Association will be making no further comment.”

A Police Scotland spokesman said: “Police in Edinburgh arrested and charged a 48-year-old man in connection with drink driving eastbound on the A720 around 12.55am on Sunday September 10th.

“He is due to appear at Edinburgh Sheriff Court on October 10th.”

O’Neill, who lives in the Scottish capital, will lead Northern Ireland against Norway in Oslo in their final World Cup qualifier two days before that court date.

Northern Ireland’s current boss assumed the post five years ago and has turned around the country’s fortunes, leading them to the knock-out stages of Euro 2016 in their first major tournament in 30 years.

World Cup qualification victories over San Marino and Czech Republic earlier this month extended the nation’s record-winning streak to five successive victories, and they look set to clinch one of the play-off berths to give themselves a chance to reach their fourth World Cup finals next summer.

When the Fifa rankings are released later this week, Northern Ireland are projected to be in the top 20 for the first time in their history having sunk as low as 129th three games into O’Neill’s reign.

O’Neill, who has previously managed Brechin City and Shamrock Rovers, signed a new deal with the IFA last year and is under contract until 2020.

1 Saudi Arabia-funded takeover of Newcastle United in serious doubt
2 Gerry Thornley: Home and away Six Nations could be its ruination
3 Decision expected next week on staging of College Football game in August
4 Kimmich floats Bayern past Dortmund and seven points clear at the top
5 Coming fourth in the Olympics didn’t change this fearless quartet, time did
Real news has value SUBSCRIBE
Crossword Get access to over 6,000 interactive crosswords