Fellaini and Lukaku on target at a sodden Old Trafford 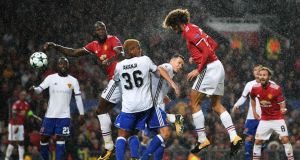 It was a victory that came at a cost for Manchester United bearing in mind the implications for Paul Pogba and the sight of the club’s most expensive player prematurely making his way along the touchline with a glum look on his face that confirmed he knew it might be the last time the crowd here see him for a while.

Pogba had not even lasted 20 minutes and maybe this is now the time for Marouane Fellaini to show why José Mourinho, like Louis van Gaal and David Moyes previously, has kept faith in him during the intermittent periods when the crowd at Old Trafford has not been so sure.

On that front, Fellaini has made a promising start, scoring within a quarter of an hour of replacing his injured colleague. Romelu Lukaku added the second goal of a freewheeling win, meaning he now has six in as many appearances for his new club, and Marcus Rashford tucked in the third from Fellaini’s cross in the 84th minute. Basel were moderate opponents and the only real disappointment for United came in the form of the hamstring strain that meant Pogba making an early departure.

The French midfielder had hamstring issues last season and it was obvious, as soon as he came out of an innocuous challenge with a Basel opponent, that he had felt the tell-tale pain at the back of his left leg. His hand reached down instinctively and, as soon as that happens, there is usually no way back. A scan in the morning will determine how many games he is likely to miss. These injuries are not usually healed inside two to three weeks, potentially longer, and that represents a considerable setback for the Premier League’s early pace-setters given the impressive way he has started his second season back at the club.

Fellaini was duly added to a team that also had Victor Lindelöf , the summer recruit from Benfica, making his first appearance since a difficult night in the European Super Cup final against Real Madrid made it apparent to Mourinho that his new signing needed easing in gradually. Chris Smalling was also brought back with another of United’s forgotten men, Ashley Young, patrolling the right back’s position in an experimental defence.

Young has been reduced to a role as an odd-job man for United, filling in here and there in a number of different positions, but he rarely lets the team down when he does get the call and it was his cross, re-enacting his days as a winger, that led to Fellaini announcing his arrival with a 35th-minute goal. Fellaini was the tallest player in the six-yard area and the goal felt inevitable as soon as it became apparent the cross was arcing towards that almighty hairdo. He can frustrate the crowd sometimes when he has the ball at his feet but this was another moment that summed up why Mourinho always speaks favourably about the Belgian.

United probably ought to have been ahead even before Fellaini guided his header past the opposition goalkeeper, Tomas Vaclik, but Henrikh Mkhitaryan headed over after the best move of the first half, involving a triangular exchange of passes with Anthony Martial and Juan Mata, and then hit the post with a close-range effort from Lukaku’s cross. A more accomplished team than Basel might have done more to test United’s new-look defence but, Pogba’s injury aside, it was a relatively stress-free opening half for the home side.

Basel have won the Swiss championship in each of the last eight season but, as sometimes happens when teams visit Old Trafford in this competition, they gave the impression throughout parts of the night that they saw the experience as an opportunity for some sightseeing rather than harbouring any real belief that they could cause an upset.

Éder Balanta, their Colombian centre half, acquitted himself well and there were some neat touches from Renato Steffen on the right side of their attack, but there was never any real danger of United surrendering their advantage once Lukaku had doubled the lead eight minutes into the second half.

Again, it was a header from the six-yard area and another demonstration, perhaps, that Mourinho has assembled a team that is more dangerous in the air than any set of players who have called Old Trafford their home stadium. This time it was Daley Blind supplying the cross, having played a short corner to Mata and receiving the ball back, and Lukaku emerged from a clutch of players to apply the decisive touch in front of the old Stretford End.

David de Gea did make one splendid save to deny Mohamed Elyounoussi after 63 minutes and Mourinho was visibly annoyed by the way Mkhitaryan lost the ball in the preceding moments to the striker’s attempt.

That, however, was the only scare and Rashford, one of the substitutes, sealed the win after Fellaini’s cross had reached him 12 yards out.