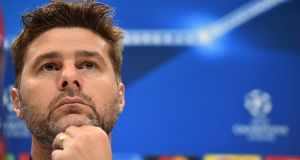 Tottenham Hotspur’s head coach Mauricio Pochettino: “We know very well what the competition demands of you. It was a very painful experience but, today, there’s not an excuse.” Photograph: Glyn Kirk/AFP/Getty Images

To Mauricio Pochettino it was simply a “painful” experience. Tottenham Hotspur had entered last season’s Champions League on a wave of optimism which had only swelled after the group phase draw put them with Monaco, Bayer Leverkusen and CSKA Moscow. They were out after five games and the abiding memories were of basic individual errors and an overall lack of savvy and creativity.

This time, despite a more difficult draw, Pochettino believes it can be different. His team kick off at Wembley against Borussia Dortmund on Wednesday night – surely the pivotal fixture – and, thereafter, they will face Real Madrid, along with the Cypriot side Apoel Nicosia.

The manager is not generally given to looking back but he feels the lessons learned at the hands of Monaco and Leverkusen can have a fortifying effect. He argued that the squad are now stronger on the psychological front and he even felt emboldened to convey a “no excuses” message.

“It was our first experience of the Champions League last season – previously 98 per cent or 99 per cent of the players played in the Europa League, ” Pochettino said. “That experience [of last season] is important. We know very well what the competition demands of you. It was a very painful experience but, today, there’s not an excuse. The competition doesn’t wait for you. We need to be ready.”

Pochettino recalled where Tottenham were in domestic terms when he arrived at the club in the summer of 2014. The top four seemed like a pipedream. Now they are established in it. Why can they not begin to belong at Champions League level?

“Three years ago, I said we needed to reduce the gap with the big sides in the Premier League and, after, we are fighting to win the league,” Pochettino said. “Why can’t we start to create the same in the Champions League and reduce the gap with these clubs? They are at a completely different level and philosophy but this season will be a very good opportunity to challenge them and see our reality.”

Pochettino’s reality is greater strength in depth than last season. The summer signings of Davinson Sánchez, Serge Aurier, Juan Foyth and Fernando Llorente have fired competition for places – which was his principal ambition for the transfer window. Aurier is in line to make his debut against Dortmund while Sánchez is expected to keep his place in the back three from Saturday’s demolition of Everton. The manager did not try his 3-4-2-1 formation in the Champions League last season. It could be another new weapon.

When Danny Rose, Érik Lamela and Victor Wanyama are back to fitness, Pochettino will feel blessed with options – and that is not to mention Dele Alli, who is suspended for the opening three Champions League fixtures after his sending-off against Gent in the Europa League last season. “Of course, we will miss Dele and he’s gutted, but we have a fantastic squad and whoever comes in will be ready to compete on the big stage,” Harry Kane, the striker, said.

Pochettino mentioned the sale of the right-back Kyle Walker to Manchester City but also how he now has Aurier and Kyle Walker-Peters for the position, together with Kieran Trippier, while Kane referenced the lift the richly experienced Llorente has brought. The manager said: “In the last three seasons I have listened a lot to how we need to create the competition in the squad – not only have 11-12 players but 20 with the possibility to fight for the starting XI. It’s fantastic to have different options. All the big teams have competition in all the positions.”

Pochettino was startled last season by the “massive amount of focus and energy” the Champions League demanded. It is one thing to hear about it; quite another to experience it. He also spoke about the all-consuming nature of the Premier League – to him it is a higher priority in England than the Champions League, which is a unique situation when compared to the rest of Europe – and it was clear he feels the English teams are at a disadvantage, particularly as they have no winter break. The strength of his reshaped squad faces the acid test.

However, Pochettino did not want to look too far beyond the game against Dortmund. With Real the hot favourites to win the group, it looks like being a shootout between Tottenham and Dortmund for second place. With the head-to-head tie-break possibly crucial, the games between the clubs have the look of a two-leg knockout.

“Last season, after the first game at home against Monaco [which Tottenham lost 2-1], it was difficult to change the dynamic,” Pochettino said. “This game against Dortmund is so important. To start well will be key to the future. It is like a final.”