Manchester United back in their ‘natural habitat’ against Basel 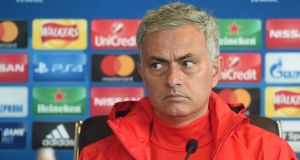 Jose Mourinho feels Manchester United will be back in their “natural habitat” when they return to Champions League combat for the first time in 644 days against Basel at Old Trafford on Tuesday night.

“To be in the Champions League is just to go back to the natural habitat, season after season, for Manchester United,” the manager said. “I look forward to tomorrow and hope Old Trafford feels it in the same way we feel it. Our motivation’s high. We’ll try to qualify and enjoy that special knockout phase with the best teams in Europe. ”

Although last season was only the second campaign in 22 years in which United had been absent from the competition, Mourinho was not about to dismiss the Europa League, which his team won this year. “I enjoyed it,” he said.

Accordingly, Basel promise to represent a fairly gentle reintroduction to United’s favourite competition. Raphaël Wicky was routinely described as “combative” during his days as a defensive midfielder for, among others, Hamburg, but the 40-year-old’s new side are not yet cast in anything like a similarly formidable image.

Indeed, Wicky has endured a somewhat tough induction, after years of working his way through the youth ranks at Basel resulted in his promotion from coaching the under-21s to managing the seniors this summer.

Although the Swiss champions stand a respectable third in a Super League led by Zurich, they are 10 points worse off than this time last year and lost 2-1 at home against Lausanne last Saturday.

Basel, close to the French and German borders and bisected by the Rhine, is better known for its museum-studded medieval centre, complete with a handsome red standstone town hall and Gothic cathedral, than the local football club. Yet even in the relatively genteel context of St Jakob-Park, there seems a sense of pressure building.

Ricky van Wolfswinkel hopes to ease it. He may have been branded a Premier League flop during an underwhelming stint with Norwich City but, on the European mainland, it is a very different story for a striker averaging more than a goal a game.

With Phil Jones and Eric Bailly suspended, their replacements, Chris Smalling and Victor Lindelöf, will need to beware Van Wolfswinkel. “I don’t think Bailly and Jones are better than them,” said Mourinho, whose side dropped their first Premier League points during the 2-2 draw at Stoke City on Saturday. “Even if Jones and Bailly weren’t suspended, probably I would still play Lindelöf and Smalling. For me they’re the same level.”

Nonetheless, it appears an important night for Lindelöf, as the Sweden defender, signed from Benfica for £31 million, starts his first game at Old Trafford. “I think it is easier for him to play Champions League,” Mourinho said. “It’s more comparable to the Portuguese style. He needs a little time to adapt to the Premier League but I’m more than confident about him. He’s a very good player with a very good potential. There are reasons for the other boys, Eric and Jones, to be worried because Victor’s a very good player.”

He had similarly warm words for Marouane Fellaini, who appears to be overcoming a calf problem. “He’s a very important player for me - much more important than what you can imagine,” Mourinho said. “I feel weaker without Fellaini in my squad.”