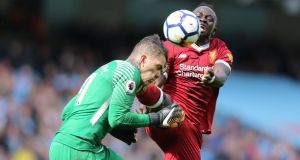 Liverpool’s Sadio Mane will serve a three-match suspension for his red card at Manchester City after his appeal against the length of the ban was rejected.

The Senegal forward was sent off by referee Jon Moss after raising his foot and clashing with City goalkeeper Ederson in the Reds’ 5-0 defeat on Saturday.

A statement from the Football Association on Tuesday said: “Sadio Mane’s three-match suspension, which was effective immediately, remains in place after his claim of excessive punishment was rejected following an Independent Regulatory Commission hearing.”

Mane will miss this weekend’s Premier League visit of Burnley plus the Carabao Cup/league double-header with Leicester next week.

The 25-year-old collided with Ederson after 37 minutes of the league contest at the Etihad Stadium.

The Brazilian needed around eight minutes of treatment before he was taken off on a stretcher. A photograph released since has shown eight stitches in wounds on the side of his face.

He was able to return to the City bench in the second half, and trained – wearing protective head gear – on Tuesday ahead of Wednesday’s Champions League match at Feyenoord.