Manager less than bullish despite presiding over squad worth €860 million 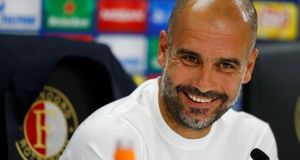 Pep Guardiola: “I don’t know if we are able to compete. We are still in the process of growing.” Photograph: Michael Kooren/Reuters

Pep Guardiola admits he does not know if Manchester City can win the Champions League as his side are still in the “process of growing”.

The manager’s side face Feyenoord in their Group F opener at Rotterdam’s De Kuip Stadion on Wednesday night. Guardiola’s view may cause some surprise as he has just overseen a €250m spend in the transfer window, and City’s squad cost €860m to assemble, the most expensive in football history.

Guardiola can also call on Kevin De Bruyne, Sergio Agüero, David Silva, Fernandinho, Nicolás Otamendi and Yaya Touré, who all played against Real Madrid in the 2016 semi-final for City.

Yet Guardiola said: “I don’t know if we are able to compete. We are still in the process of growing. I’m so happy with the players we have. We can do better than last season – but I don’t know. We’ll see. I think last season we did good things, it wasn’t enough. But of course I am satisfied.

“We are not dreaming – when you’re in that position [of having a chance] it’s better to be calm. When you arrive in the last stages you say the dream is close but now it’s still far away.”

Feyenoord are the Dutch champions after their head coach, Giovanni van Bronckhorst, guided the club to a first Eredivisie title since 1999. While they are without the injured Nicolai Jorgensen, who was the league’s top scorer with 21 strikes last term, Guardiola struck a cautious note.

“Why is this an easy start? Feyenoord have more titles [winning European Cup in 1970] than Manchester City. History counts. We cannot deny English teams have more money, spend more money. I grew up loving the Holland culture how they play. I was a lucky guy. I was a football player working with my idol Johan Cruyff [at Barcelona] and after that Louis van Gaal, a lot of Holland players in my team. I know how they play.

“Tomorrow [on Wednesday] we play our first game in the group stage. It’s a dream to be here again for a club like Manchester City. We fought a lot to be there to qualify. The gap was so close between us and Arsenal and Liverpool and Manchester united, so we fought a lot to be here. We start our road. It depends on our level. I know how complicated it is. Last season we did not win one game away. I know from my experience even in Barcelona and Bayern Munich how it is to qualify for the next stage. We made the semi-finals [at Bayern] but it was so tough.

“It doesn’t matter who we are playing, the famous teams or the lower teams. Hopefully the players can enjoy being here. We are starting in a country that appreciates and loves football and we will try to do our best.”

Guardiola left Touré behind in Manchester and the Ivorian is yet to play a second for City in their four games this season. The 46-year-old said the midfielder had been excluded for reasons of form.

“Hopefully he will play soon. It depends on the player. I’m always happy [with him] but of course I demand as much as possible. I want more, not just from Yaya – I want more from everyone.”

Guardiola will also be without Vincent Kompany, who has suffered his latest calf problem. The captain has been plagued with injury in recent years yet the head coach has no doubts over his future.

“We are taking care of him,” Guardiola said. “We’ll see about Vincent in the next weeks, but I think hopefully he’ll soon be fighting with his team-mates to play.”

In the 5-0 win against Liverpool in the Premier League on Saturday, Ederson sustained a serious face injury. Yet the goalkeeper’s recovery has been so quick that he is in the squad.

John Stones, who may line up alongside Otamendi and Danilo in a three centre-back system, said: “Ederson has got on with it straightaway. After the game in the changing room he was speaking to the boys as if nothing had happened, which shows what character he has got.

“He just wants to be around the team, in that environment. I’ve personally not tried to ask him too much about it because I know everyone else will be. Everyone has seen his face, the stitches, the swelling but he’s got on with it, put a scrum cap on and he’s been training today.”