Liverpool relish return to competition that defines the club 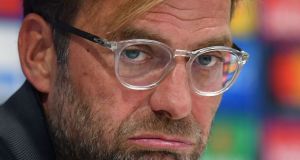 Jürgen Klopp had not long sat down in the Etihad Stadium’s media room following Liverpool’s 5-0 defeat to Manchester City at the weekend when he was asked about his side’s upcoming Champions League group match against Sevilla. Perhaps rattled by his heaviest loss since arriving in England two years ago, the German stumbled.

“We play Tuesday,” he said, before being corrected. “We play Wednesday? Really? One day more. Good.”

It was a curious error but what can be said with confidence is that even if the manager is not sure when Liverpool next play, the supporters certainly are. After all, they have been waiting for this moment for a long time.

Ever since December 9th, 2014, to be precise. It was the evening Liverpool hosted the Swiss champions Basel in their final Champions League Group B match requiring a victory to progress to the knockout rounds. The stage was set for a classic European night at Anfield – the colour, the noise, the eventual triumph for the men in red. Instead Basel took the lead and frustrated their opponents, whose only meaningful response was a Steven Gerrard equaliser nine minutes from full time.

And so concluded a wretched return to Europe’s elite competition for the first time in five years for the five-time winners – finishing third, two points behind Basel and 13 behind Real Madrid, after winning only one of their six group fixtures. The final whistle sucked the life out of Anfield and for many also signalled the beginning of the end of Brendan Rodgers’ tenure as manager. He was sacked and replaced by Klopp the following October.

But now Liverpool are back and it is a neat coincidence that their first group game since drawing with Basel should be against the side who delayed their return to the Champions League by beating them in the very same Swiss city 16 months ago.

Sevilla’s 3-1 triumph in the 2016 Europa League final was a desperately disappointing outcome for Klopp’s men, who led at half-time through Daniel Sturridge’s fine strike before capitulating after the interval. They missed out on a trophy as well as automatic Champions League qualification. Collective introspection followed, as did a recovery with Liverpool finishing fourth in the Premier League last season and victory over Hoffenheim in a play-off last month. And now they are reunited with a team who have undergone significant change since they last met in Switzerland.

As well as losing a number of players who helped them win what was a third successive Europa League title, most notably Kevin Gameiro, Sevilla lost the man who masterminded the triumph, Unai Emery, who departed for Paris Saint-Germain the following month. His successor, Jorge Sampaoli, stuck around for one season before taking over Argentina’s national team and was replaced by Eduardo Berizzo, who arrived from Celta Vigo in June.

Under Berizzo, Sevilla have scored nine goals in five games playing a 4-3-3 formation in which the former Blackburn and Stoke midfielder Steven N’Zonzi continues to play an important role. There is also pace out wide in the shape of the former Manchester City forwards Jesús Navas and Nolito, although the latter is missing through injury for what will be Sevilla’s first visit to Anfield.

For Liverpool Philippe Coutinho is set to feature after Klopp confirmed the Brazilian will be part of his match-day squad for the first time this season having recovered from a (transfer request-related) back injury. He could start in a side that also contains the pace of Sadio Mané and the guile of Roberto Firmino.

Goals are all but certain in a match between the sides expected to qualify from a group that also contains Spartak Moscow and Maribor, but a fear for Liverpool after their Saturday shellacking is that they will concede more than they score.

The team have improved defensively under Klopp, with seven clean sheets in their 11 games prior to the defeat at City proof of that, but vulnerabilities remain and that is why many believe that even if Liverpool emerge from Group E, they will not progress much further.

Perhaps, but then few expected Borussia Dortmund to reach the Champions League final in 2013 playing aggressive, attacking football. Klopp, Dortmund’s manager then, will no doubt draw on that experience as he reacquaints himself with the competition.

There are differences, of course. For starters this Liverpool team do not have a striker as potent as Robert Lewandowski, a midfielder as influential as Ilkay Gündogan or a centre-back partnership as sturdy as Mats Hummels and Neven Subotic. They are also not as refined or, quite frankly, as talented as the squad Klopp oversaw four years ago. But what can be taken from Dortmund’s run to the final is that a team that presses high up the pitch and attacks with energy and pace, rather than sits back and one-nils their way to victory, can thrive in the Champions League. Indeed in the context of Liverpool’s defensive frailties it is worth pointing out Dortmund kept only four clean sheets in 12 group and knockout games prior to be being beaten by Bayern Munich at Wembley.

There is hope, then, for Liverpool of a rewarding Champions League run, and certainly one better than 2014-15. More than anything, there is simply that feeling of being back in a competition that has come to define the club.

From the old European Cup to its modern-day equivalent, from Rome 1977 to Istanbul 2005, from Hunt, Callaghan and St John against Internazionale in 1965 to Torres, Gerrard and Dossena against Real Madrid in 2009; so many memories, so much history, and now the chance for a brand new chapter under a manager who has already experienced the hair-raising atmosphere Anfield can generate on a European night during the 4-3 victory over Dortmund in April 2016 and expressed his desire for more.

The first thing he has to do is get to the stadium on the correct day. Wednesday, Jürgen, Wednesday. Guardian service