Smiling José Mourinho doesn’t look like a manager in crisis 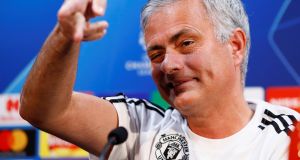 Manchester United manager Jose Mourinho during the press conference ahead of their Champions League clash with Valencia. Photo: Jason Cairnduff/Reuters

From the selection of personas available to him in times of alleged crisis, José Mourinho chose the sunny, upbeat one for the press conference ahead of the Champions League meeting with Valencia that could, theoretically, turn into his last game in charge.

He wore white instead of black, the smile was on full beam, he helpfully held up his phone and pointed out the man from the Sun when a Spanish reporter asked whether Zinedine Zidane had really been in touch, and in response to another Iberian question about whether he was failing at Manchester United he made a joke about being on the same level as their beloved Atlético Madrid.

Valencia are even lower in the La Liga table than United are in the Premier League and on current form would not ordinarily be regarded as difficult opponents, though it is the wretched form recently shown by Tuesday’s hosts that could be the greater factor in the contest.

Not only have United just managed to get knocked out of the Carabao Cup at home to Derby of the Championship, on Saturday they contrived to make West Ham look like world-beaters, which must have been a bigger surprise to Manuel Pellegrini than the goals gifted to his side at Goodison on his 65th birthday.

United are nine points off the title pace just seven games into the season, and to outside eyes at least Mourinho seems to have compounded their worst start for 29 years by conducting public feuds with his players. Paul Pogba was substituted at the weekend and Alexis Sánchez dropped altogether, the Chilean reportedly furious about being taken to London and made to sit in the stands.

Perhaps more damaging still are the suggestions that United’s present lethargy – statistics showed they made fewer sprints at West Ham than any other team in the Premier League last weekend – might be a deliberate attempt to undermine the manager’s position. The conclusion being drawn is that what happened to Mourinho in his final season at Chelsea is happening all over again in Manchester, though that could be an oversimplistic analysis.

The manager has given his players public backing, claiming he has never known a dishonest professional, and asked them to step up their performances against Valencia. So the proof should be in the pudding.

“The manager is trying to turn this around, he wants to make us stronger,” said Nemanja Matic, a player who was at Chelsea with Mourinho the last time things went awry and one who declined to comment on whether he was experiencing any sort of deja vu.

“It’s not my job to analyse that,” the midfielder said diplomatically. “The players all know the situation is not good and we know we can do better. Everyone is trying to give more and hopefully Valencia will be a chance to show that.”

The normally reliable Serbian was as hard on himself as his teammates when reflecting on Saturday’s defeat.

“We did not play well, Saturday was not good and I think I played one of the worst games I’ve had since joining Manchester United,” Matic said. “If I looked in the mirror it was to tell myself I could do better.

“We made mistakes, for sure the manager will be telling us about them, but I don’t believe any player goes on to the pitch not wanting to give his best. It is never easy when you lose games, especially when you are at a big club where everyone expects you to win. There is pressure on us now, but to be honest there is always pressure in football.

“When you are at a club like this, every single day is a new challenge, in every game you play you have to prove all over again that you deserve to wear the shirt and you are worth your place on the pitch.”

Matic did not deny that the United players had been talking about the situation – with Luke Shaw setting the tone with his admittance that the ones on the pitch needed “to look at ourselves” rather than looking to the manager for guidance – but the midfielder would prefer action to words, and preferably in the next match.

“I don’t think with talking you can resolve something,” Matic said. “You need your leaders on the pitch, the ones who are not scared to play. In the next games we will see who is the leader. Talk in the dressing room doesn’t mean anything. Sometimes it can help but most important is on the pitch.” – Guardian service