FA board approves sale of Wembley Stadium for €673m 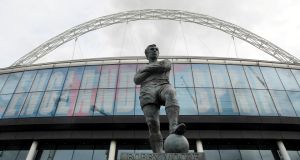 The Football Association board has approved in principle the sale of Wembley Stadium for £600 million (€673m) to Fulham and Jacksonville Jaguars owner Shahid Khan. The proposal, with protections for England, FA Cup and other prestige football matches to be played there, preservation of its name without a sponsor and reassurances that the proceeds will be spent on grassroots facilities, will next be presented to the FA council on October 11th.

In a statement an FA spokesperson said: “The sale of Wembley Stadium, the negotiated protections and an outlined plan to invest £600 million into football community facilities, were presented and discussed at the FA board meeting today. Following on from this discussion, the FA board has agreed to take the presentation to the FA council to get its input now that the full facts are known.”

The three representatives of the professional game on the FA’s 10-person board are understood to have been fully in favour of the plan, as have the chairman, Greg Clarke, and chief executive, Martin Glenn. Since news of negotiations with Khan broke in April, Glenn in particular has publicly explained the FA’s view that it could transform grassroots facilities, describing it in a speech to the council in May as “an opportunity to unleash an unprecedented amount of investment into community football”.

Representatives of the amateur, grassroots “national game”, of which there are three on the FA board and a majority on the council, have mostly expressed doubts recently about whether the money really will be spent on community facilities. That concern was partly prompted by the EFL chief executive, Shaun Harvey, arguing that the FA’s agreed distribution system is for 50 per cent of income to go to the professional game. Reassurances have been given that any money handed to professional clubs would be spent principally on facilities at their community trusts and foundations.

The former Manchester United and England player Gary Neville argued before a parliamentary committee in July that selling Wembley was “ridiculous” and that more money for grassroots facilities should come from rich Premier League clubs or a levy on agents’ fees. However, no active efforts have been made since then to make such alternative funding a reality, and Glenn said in response then that the FA “has waited for years . . . hoping that something around the corner might turn up” and did not want to decline the Wembley sale on the promise of “jam tomorrow”.

Ultimately the FA board has to sign off any sale, then approval is required from the government and Sport England, which contributed £120 million of national lottery funds towards the £757 million cost of rebuilding Wembley. The sports minister, Tracey Crouch, and the chairman of Sport England, Nick Bitel, indicated in July that they supported the sale in principle if the proceeds, including the public grants, will be reinvested in grassroots facilities via the Football Foundation.