Sessegnon finally gets a chance to step into Spurs spotlight

Former Fulham star to make his full debut against Bayern 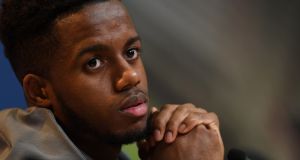 Ryan Sessegnon: England U-21 international will get a chance to show his quality for Tottenham Hotspur against Bayern Munich in Germany. Photograph: Andreas gebert/Reuters

Ryan Sessegnon has had to wait. Not just for his transfer to Tottenham, which was years in the making, but for the moment when he steps out as a part of the London club’s starting line-up. At last, it is now upon him.

The 19-year-old left-sided player will make his full Spurs debut at Bayern Munich in the Champions League tonight, which is some stage for a bow, even if the final Group B tie is largely meaningless. The Germans are assured of their progress into the last 16 as group winners; Spurs as the runners-up.

Do not tell Sessegnon that.

He has thought about being a starting Spurs player from the moment the club made their first serious moves for him, which were in the 2016-17 season, when he made his senior breakthrough as a 16-year-old at Fulham. Spurs’s interest would ramp up. They failed with a £25m bid in the summer of 2018 and they tried again without success in January of this year before they finally got a deal done for £25m in August.

When Sessegnon joined Spurs, he was injured, having suffered hamstring damage on England under-21 duty at the European Championship in June. He hoped it would not be too long before he was playing for Mauricio Pochettino; the Argentinian manager was a key reason for his desire to sign.

Sessegnon was wrong and, over the first three months of the season, he was a helpless onlooker as the team fell apart.

He would catch the dog days of the Pochettino era, getting on for one minute at Everton in early November; 15 at Red Star Belgrade when he made an assist for Christian Eriksen and warming the bench against Sheffield United. But this was not how he imagined his Spurs future.

Enter José Mourinho and it is a small example of how little has gone right for Sessegnon this season that he missed his new manager’s first day at the club because he was travelling back from England under-21 duty in Holland.

Would Mourinho put his faith in young players, as Pochettino tended to do? It was a question that had to be on Sessegnon’s mind, given Mourinho’s reputation for favouring more established professionals and, when he was the 19th man in Mourinho’s first three Premier League squads, it felt worrying.

Sessegnon was an unused substitute against Olympiakos in the Champions League but, on Saturday, he enjoyed a breakthrough when he came on for the final 15 minutes against Burnley.

Now for Bayern. Mourinho will make changes as he addresses a clutch of injuries and rests four established players – Serge Aurier, Jan Vertonghen, Dele Alli and Harry Kane – although his line-up is still expected to lean on established quality. For Sessegnon, it is an opportunity that must be seized.

“The plan was to come here and play in these big games,” Sessegnon says. “This would be the biggest one I’ve played in.”

Sessegnon makes the point that it has been a long time since he started a game – it was June 18th against France’s under-21s, to be precise.

“Coming to the club injured wasn’t easy for me and, as it was my first serious injury, it was hard to watch the boys train when all I wanted was to be involved,” he says. “I never thought I’d be out for so long. “

When Sessegnon imagined his first start for Spurs, it was under Pochettino and he does not hide his disappointment at how things unravelled for the former manager.

“He [Pochettino] was a big part of me coming to the club,” Sessegnon says.

“I knew they had been watching me for a while and to finally come to the club and play under him was a dream come true. Then, for him to go suddenly after not working with him at all was disappointing. It’s part of the game and I’m just trying to work and improve under the new manager.”

Mourinho tried three times to take Sessegnon to United – the most recent was in the summer of 2018 – and now he wants the softly-spoken Londoner, who at the moment he sees more as a left winger than a left-back, to come out of his shell.

“I think he wants me to show a bit more personality, show that I will fight for my place,” Sessegnon says. “I definitely need to be more vociferous.”