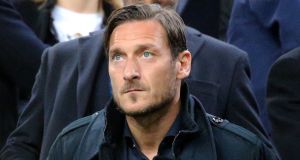 Former Roma captain Francesco Totti has urged fans to behave themselves ahead of the clash with Liverpool. Photograph: Getty Images

Francesco Totti, the revered former captain and symbol of Roma, warned fans to behave and urged for calm ahead of Wednesday’s Champions League clash with Liverpool, as the city braced itself for possible outbreaks of violence.

From a ban on alcohol around Stadio Olimpico that will take effect on Wednesday night to plans to open the stadium early on Wednesday for Liverpool fans, Roma officials have sought to put measures in place to prevent the kind of violence that erupted in Liverpool last week for the first leg of the semi-final.

The attack put a spotlight on Roma’s violent ultras, who were seen attacking Liverpool fans wearing balaclavas and face scarves, swinging ropes and bats as they sang songs insulting their opponents. The ultra fans have been called “f***ing idiots and a******s” by James Pallotta, the Roma president, but the violence last week has highlighted that the militant fans are not just troublemakers. They pose a serious security risk.

About 5,000 Liverpool fans were expected to arrive in the Eternal City from Tuesday, and Italian police have been holding meetings with Uefa, their British counterparts, and officials from both teams to discuss security measures.

Uefa’s Kenny Scott, the director of safety, has urged authorities to ensure that British fans are not left too long in either the stadium or the Piazza delle Canestre meeting point, according to Corriere dello Sport. Liverpool fans will also be urged to confine their tourism to two spots in the city where there will be a heightened police presence: Campo di Fiori, and Largo Corrado Ricci, near the Roman forum.

About 2,000 police officers will be patrolling Rome in connection with the match. The Italian authorities have also been warned about 30-40 “risky” Liverpool fans who were considered to possibly pose a security threat but had not been barred from attending the match, according to La Repubblica.

Totti, who retired last year, said in a statement to fans on Monday that all eyes were now on Rome. “The world looks at us and we want to dress Rome with its best suit: we are its ambassadors, we have a great responsibility, inside and outside the Olimpico Stadium,” he said.

The question now is whether Totti will influence the Roman ultras.

Pallotta, an American, called last weekend for Italians to come together to denounce extreme fans that have damaged the reputations of all major Italian teams.

There has been one incident of deadly football-related violence in Rome in the last few years. In 2014, a Napoli fan was shot dead during a clash with a Roma fans before the Italian Cup final. Ciro Esposito (29) was killed before the match at Stadio Olimpico. Police said the shooting occurred after the Roma fan insulted the Napoli fans. When they responded to the jeers, he shot them, killing Esposito.

Among various security measures, a special focus has been placed on controlling the sale of alcohol, not only near the stadium but also in the Rome city centre. A ban on alcohol around the stadium will take effect at 7pm on Tuesday night, while a more general ban in the city centre will begin at midnight and last until 7am on Thursday.

Rome’s police chief, Giampietro Lionetti, said this week: “There is a lot of history between the two sets of fans, and it will be our job to keep them all safe.”