Gifted second-half goal will haunt German side after Bernabeu thriller 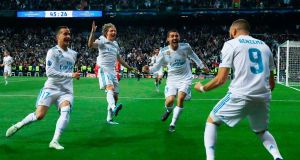 Real Madrid always find a way, they say, and somehow they did – all the way to a third consecutive European Cup final. For so long, they had the Bavarians at the gates, the Santiago Bernabéu gripped by fear, but when a wild, tense night was finally over, there they were, still standing. A goal down after three minutes, they were not safe until the very, very end, but it is they who made it to Kiev.

“The European Cup releases special powers in Real Madrid,” Toni Kroos had said; it does something to their opponents too. For Bayern, 40 shots over two legs ultimately proved less decisive than three gifts, each greater than the last.

This time it was Corentin Tolisso’s blind back pass and Sven Ulreich’s slip that ultimately cost them. For a long time it appeared that they might overcome even that but standing before them, diving before them too, were Real Madrid, the team that knows better than anyone else that to resist is to win – however you do it. And late, very late, one last ball was sent into Madrid’s area, desperate whistles bursting ear drums. As it escaped Thomas Müller, the referee blew at last. “That is how Madrid win!” they chanted.

While Sergio Ramos had talked about the importance of defensive solidity and his hope that Madrid could make the most of the counter-attack, but Zinedine Zidane’s diagnosis was different, at least publicly. He warned that Bayern would play “without fear”.

The solution, Zidane said, was “not to take a step back”. Yet it was Bayern who began on the front foot and swiftly levelled the aggregate score. Just three minutes had gone when the ball dropped to Joshua Kimmich to score from close range.

Zidane had left out Casemiro, instead playing Mateo Kovacic in the middle of midfield. Luka Modric played further to the right than normal, where part of his role appeared to be support Lucas Vázquez, the midfielder playing at full back in the absence of the injured Dani Carvajal. Vázquez had faced Franck Ribéry in the final minutes of the first leg. He had resisted but it had not been easy: “Ribery is 35, but it is like he was 25,” he commented afterwards. Now, he had to do so again and, despite the support, the task was made more difficult by David Alaba overlapping.

With Modric drawn across, meanwhile, Bayern found space inside, where James Rodríguez, playing deep, found holes and Madrid were often outnumbered. Marcelo’s superb cross was headed in by Karim Benzema to make it 1-1 after just 10 minutes, but Bayern had always needed two anyway and continued to combine, even if the final pass was often found wanting. Müller’s pull back was poor, Alba forced a corner, and Robert Lewandowski was unable to connect with clarity.

When Madrid did break, overcoming the first obstacle, space opened for them. Marcelo made his way to the byline, close to the six-yard box but, unsure whether to pull the ball back or shoot, could not find the finish and from the corner, taken short, Kroos was crowded out. Again, Madrid had reached deep into the Bayern area. They had not scored but they had succeeded, if momentarily, in concerning Bayern. They soon stepped up once more, though. Müller’s shot on the turn was under-hit after Ribéry had gone beyond Vázquez and then, on the half-hour, came an astonishing miss.

Mats Hummels had carried from the back, going past three players and slipping the ball into the area for Lewandowski, alone. His shot looped up off the body of Keylor Navas and Müller leapt to head goalwards, the ball hitting Marcelo’s back. It dropped to Rodríguez but he volleyed over from three yards. Soon after Cristiano Ronaldo forced a save from Ulreich, a reminder that the risk was always there and Bayern must have felt that they needed another goal before half-time. Tolisso curled wide and then Marcelo appeared to handle before Lewandowksi forced a corner. Amid the whistles, Hummels headed wide.

The chance, it seemed was gone. Barely 30 seconds into the second half, it really had – and in the most absurd manner, Ulreich slipping and Benzema, barely able to believe it, running the ball in. Tolisso had played the pass blind and Ulreich froze, before going to ground and watching in horror as Benzema strolled beyond him, another “gift” to add to the two Jupp Heynckes had bemoaned in the first leg.

The game felt broken now, but it wasn’t yet. Alaba’s shot was pushed away by Navas and then Lewandowski tumbled, challenged by Ramos. Bayern were occasionally exposed, the game open, Ronaldo almost adding a third, but they had to keep coming. White bodies were on the line, ever deeper, defending a 2-1 lead, just like in the first leg, roars accompanying every block, save and header clear.

Soon, it was a 2-2 they had to defend. Tolisso couldn’t force home and, on the hour, first Thiago Alcântara and then Lewandowski fired goalwards. Navas saved, the rebound was blocked, the pressure grew, and Bayern got the equaliser. Rodríguez volleyed Niklas Süle’s cross, reacted swiftly to the rebound and guided the ball under Navas from a tight angle. A former Madrid player, he didn’t celebrate but the German fans did.

This was on a knife edge now, nerves gripping this stadium, but if there is a team that lives on the edge, it is Madrid. Casemiro came on to contain, Gareth Bale to escape, but the pattern persisted. Chances came and went before in the fourth minute of added time Navas dived to punch once more, Müller slid for it, but the ball evaded him, taking the final with it. – Guardian service

1 Shock at golf clubs as sport faces shutdown in Level 5
2 Disappointment and frustration par for the courses as golf goes into lockdown
3 Molde turn up the heat in the second half to dim the lights on Dundalk
4 Philip Reid: Hard to find the sense in closing golf clubs
5 Level 5 golf shutdown: Ireland one of few countries to close courses
Real news has value SUBSCRIBE