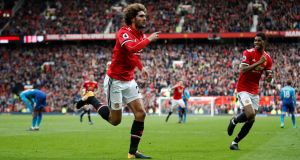 The problem with football, as Arsène Wenger is rapidly finding out, is that there is never any guarantee of a happy ending. The lingering memory of this game will be the applause that followed Arsenal’s manager down the touchline before the match. Yet Manchester United’s hospitality, on a day when Alex Ferguson made a special presentation to his former bête noire, was never likely to stretch to events on the pitch.

Wenger was clapped in but, by the end, he did not look like a man who cared a great deal about whether he might be afforded the same courtesy on the walk back to the tunnel. His team had conceded a 91st-minute winner and the bottom line for Arsenal, however rich the tributes might be for the departing manager, is that they have now lost six successive top-division away fixtures for the first time since 1966. Arsenal are the only team in England’s four professional divisions who have lost every league match on the road since the turn of the year, and Marouane Fellaini’s late goal means Wenger will not remember his final visit to this stadium with any affection.

Fellaini’s stoppage-time header was cruelly timed because until that moment it had looked like being a satisfying result for Arsenal courtesy of Henrikh Mkhitaryan’s equaliser earlier in the second half. Paul Pogba had given United a first-half lead but José Mourinho’s team had struggled at times against a vastly changed Arsenal line-up, selected with the second leg of the Europa League semi-final against Atlético Madrid uppermost in Wenger’s thoughts.

In total, Wenger made eight changes from the team that drew the first leg last Thursday. It was the youngest Arsenal team, with an average age of 24 years and 67 days, since the infamous 8-2 defeat here in August 2011 and, to put it into perspective, there were three teenagers on the bench – Eddie Nketiah, Jordi Osei-Tutu and Joe Willock - with a shirt number in the 60s. Arsenal’s entire match-day squad included only one player, Mkhitaryan, with a number from one to 11.

Wenger’s record against Mourinho – two victories out of 19 attempts – is fairly lamentable even with his strongest group of players available. Here, though, he was trying to do it with the kind of inexperienced team he would usually put out in the earlier rounds of the Carabao Cup. In the process, he gave Konstantinos Mavropanos, a 20-year-old Greek defender signed from PAS Giannina in January, his first start. Arsenal’s midfield quartet included Reiss Nelson and Ainsley Maitland-Niles and, with so many changes, it must have been troubling for Mourinho that his team could not exert more control.

Alexis Sánchez, for instance, found it heavy going at times against his former club. He was, however, prominently involved in Pogba’s goal after Romelu Lukaku’s cross had picked him out at the far post. Sánchez’s stooping header was goal-bound until Héctor Bellerin jutted out his leg to divert the ball against the post. The rebound fell kindly for Pogba and he turned the ball into an exposed net.

The goal had originated with Nelson, Arsenal’s youngest player, losing the ball to Jesse Lingard close to the halfway line. To be generous, it was a lesson for the 18-year-old that, at this level, those kind of mistakes tend to be punished by the elite teams. Yet Nelson, to give him his due, showed flashes of potential and the build-up to Arsenal’s equaliser was a reminder that even players of considerable experience can be guilty of costly lapses.

For this one it was a combination of errors, with Antonio Valencia playing a short pass inside from the right touchline and Nemanja Matic and Ander Herrera leaving the ball to one another. As soon as Granit Xhaka took possession, United were vulnerable. Mkhitaryan had sprinted upfield to be in support and his shot went through Victor Lindelöf’s legs to find its way into David de Gea’s net.

By that stage United had lost Lukaku to an injury and it was not until the final exchanges that they managed to pin back their opponents. Fellaini hit the post with one header and when the substitute Marcus Rashford bundled in the rebound the goal was ruled out by a late flag. Unfortunately for Wenger, the next time Fellaini won a header in the penalty area it was the winner.