After five goals in first 21 minutes, master of systems Guardiola must have been seething 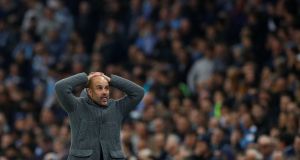 Pep Guardiola aways did get a bit tetchy when people asked him about Manchester City doing the quadruple. On the bright side, he is in the clear now.

Although as ever Guardiola will not be entirely free from questions at the end of a wild, thrilling, at times utterly mind-bending match. There is a theory that Guardiola, the master of control and systems, just isn’t suited to the intangibles of one-off knockout football, nights where an entire campaign can be thrown away in a fit of human frailty or a surge of irresistible emotion.

It is an idea that will gain more traction after another of these April knockout ties that seem to have been staged just to torment that obsession with shape and pattern.

How Guardiola must have hated the opening 15 minutes when both teams played through a glaze of rage, when the birds flew backwards in the sky, the night fell apart a little and the contest was reduced to a battle of adrenal wills.

This was still a game of absurdly fine details. Had Sergio Agüero been able to keep his foot onside in the 94th minute the story would have centred on a great escape for a discombobulated City, led by a sensational hat-trick from Raheem Sterling.

But the fact is that did not happen. Instead it was Spurs who howled into the night and seized the vital moments. Whereas City took their opportunity to lose the game in that interlude of swivel-eyed disorder at the start.

What do you get when the movable object meets the resistible force? When the team who so often fall short meet football’s great pulsing super-brain with a hang-up about quarter-finals?

Well, you get something like this. Between them City and Spurs scored five goals in that quarter of an hour. Whenever either team attacked they looked like scoring. Frankly the referee could have had a hat-trick by half-time.

And yet through it all you felt it was City who would suffer more, even when they took the lead and seemed to be setting this tie in order.

There was a beacon of calm for City in that period. Guardiola is obsessed with his wide players staying wide, to the extent that in his first summer at the club he painted a white spot on the training pitch and ordered Sterling to stand on it during practice when his team had the ball.

Sterling did stay on his spot through the early chaos. The visitors had emerged camouflaged against the turf in their horrendous deep menthol green away shirts. Fittingly the Spurs defence disappeared almost immediately, Kieran Trippier rushing inside to cover an attack from the right. The ball reached Sterling, who had held his ground. He spanked a lovely low shot into the far corner. City were 1-0 up. The tie was level. There was a sense around the Etihad Stadium of things being set in order, the season’s endgame being bent City’s way.

Not so fast. Within the space of six furious minutes it was 2-1 to Spurs, both goals scored by the zesty and utterly fearless Son Heung-min, who went for City like a predator from the start, veering left and right, spinning into space behind Vincent Kompany time and again.

At which point questions must be asked of the great controller. The Pep mythology demands we see some fatal error in his selections at this stage. Perhaps there was one here. Faced with a team as slick and quick as Spurs why did Guardiola pick Kompany, his most cumbersome defender, instead of the more mobile John Stones, or the more grabby Nicolas Otamendi?

Presumably Guardiola wanted leadership, a concession to the idea of personality above skill and poise. It felt like the wrong moment to go against his principles. Kompany was not directly responsible for Tottenham’s goals. Aymeric Laporte, who looked a little spooked, made one fateful error. But Kompany noticeably immobile at this level these days, a single huge stone Easter Island head stumbling around on legs that have all the snap and spring of a pair of bamboo garden poles.

Through that pent-up scream of an opening half hour City’s defence did look fazed by Son’s movement and speed, a team playing on an amphetamine rush, juiced before kick-off with two packets of mints and a litre of cola.

Bernardo Silva pulled one back, then Sterling scored again to make it 3-2 on the night. At which point Spurs lost Moussa Sissoko to a groin strain and the game began to settle. City found their patterns, began to assert a veneer of their usual control.

And yet even as Agüero scored to make it 4-3 on aggregate Guardiola fretted and strutted in his knitted grey cardigan-coat, arms describing strange, frantic shapes in the air. Perhaps he could feel it coming. Spurs won a corner. There was another struggle, another mess in the area, and suddenly it was 4-4 on aggregate, the ball bundled in off the hip of Fernando Llorente.

As the green shorts leapt and danced it felt like the most fittingly shapeless of winning goals; decisive moment in a competition that refuses to bend to Guardiola’s will but continues to remain thrillingly out of reach. – Guardian