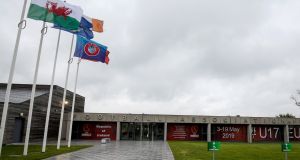 A view of FAI HQ in Abbotstown. Photo: Inpho

Sport Ireland has backed the government’s block on all funding to the FAI with the organisation’s board having agreed at its meeting on Friday that the association must implement all of the governance changes outlined in the Memorandum of Understanding (MOU) signed back in January.

Last week, the new Minister for Sport, Catherine Martin, and then Minister of State Dara Calleary wrote to the association making it clear that there would be no renegotiation of the MOU. Former Fianna Fáil spokesmen Marc MacSharry has stated that he had an agreement with his party leader, now Taoiseach, Micheál Martin, that a review of the agreement would take place when the new Government took power.

In a statement on Friday, Sport Ireland said that its board: “welcomed both Ministers’ clear and unambiguous confirmation that the new Government has no intention of entering into any discussions with the FAI or other stakeholders on the terms of the Memorandum of Understanding.

“The Board is pleased with the unequivocal statement from both Ministers of their full support for Sport Ireland in working with the FAI to support the association’s overhaul.”

The organisation’s chairman, Kieran Mulvey says that the MOU, a key element in a financial rescue to which Bank of Ireland and Uefa were also parties: “hinges on the FAI delivering absolutely essential governance reforms in the coming weeks. The progress made by the FAI in recent months is welcome and must be safeguarded and built on. There can be no return to the well-publicised financial and governance crisis.”

The changes envisaged in the MOU go beyond what was recommended by the Governance Review Group a year ago and subsequently agreed by members of the FAI. A majority of the members – including its chair, governance expert Aidan Horan of the FAI – were nominated to the committee by Sport Ireland.

When it delivered its report, Mulvey said that it: “provides a clear and comprehensive pathway for the fundamental reform of governance within the Football Association of Ireland. This significant piece of work has given serious consideration to the input of all stakeholders and the outputs from the recent Football Stakeholder Forum, while benchmarking against the principles and regulations of Uefa, Fifa and other international football federations.

“The report clearly and appropriately identifies the collective responsibility of the new Board of the FAI in leading and directing the organisation’s activities. It will be up to the new Board of the FAI to show leadership in the implementation of these critical, yet achievable, recommendations. The timely implementation of these reforms is important in the restoration of public trust and confidence in the FAI.”

On Thursday, MacSharry criticised the push being made by the new leadership of the association to have the MOU, and its provision for six rather than four independent directors, fully implemented given that the six v six balance envisaged will, assuming the chair of the board retains a casting vote, give effective control of the association to outside appointees.

The changes are opposed by a number of the elected members of the current board which was elected last summer to oversee the implementation of the Governance Review Group recommendations.

1 Trump in the rough over playing golf and US Covid-19 fatalities
2 Two in custody in Tour de France doping investigation
3 Live TV coverage of all Premier League games likely to continue into October
4 Sam Bennett hoping Tour de France success does not bring celebrity status
5 The Offload: Saracens prove Pro14 is not fit for purpose
Real news has value SUBSCRIBE
Crossword Get access to over 6,000 interactive crosswords