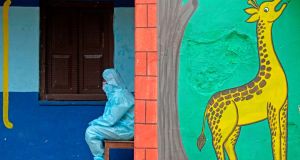 A health worker wearing PPE sits at a primary school in Secunderabad, India. Leo Varadkar has said the reopening of schools in the State will see PPE put in place. Photograph: Noah Seelam/AFP via Getty Images

The Department of Education has been finalising details in its planning document before it is brought to Cabinet on Monday.

The Government said its priority is to see the full reopening of schools at the end of August.

Mr Varadkar told RTÉ’s the Week in Politics programme on Sunday that he has read the plan in recent days and is “confident” it will allow students and teachers to return by the end of next month.

He said: “The Government’s plan is ready. It is going to go to Cabinet tomorrow.

“It involves a really big investment in changes to schools and school buildings.

“It involves extra teachers, it involves cleaning regimes, and involves all sorts of practices and procedures that may occur if there is a case of coronavirus in schools.

“And also special arrangements for teachers who have a chronic illness, for example. A lot of work has gone into it. There has been a lot of consultations with the unions.”

Sinn Féin TD Pearse Doherty said that his party has been given sight of the plan that had been promised by the current and former education ministers.

“We were told that we would have a plan by June 12th, it didn’t materialise,” Mr Doherty said.

“We need to get this right and I say that, not only as a public representative, but as a father of four children who doesn’t know how they are going back to school safely. We need this plan to work. They have put it right down to the wire now so there is very little wriggle-room if there is issues.

“We knew there would be need for additional resources, in terms of teachers, SNAs. There is limited time for us to hire those.”

He said: “With details finally starting to emerge about school reopening plans the Government must seize the opportunity to permanently reduce class sizes and ensure a generation of young people at risk are not left behind.

“The reopening of our schools is quite simply the most important item on the Government’s agenda. Nothing can go back to normal in September unless the schools are back.

“Schools will need extra staff, extra building capacity and of course resources available to clean and sanitise their classrooms on a regular basis.”

Mr Varadkar also admitted the monitoring of people travelling into Ireland from countries that are not on the “green list” needed to “tighten up”.

He said: “We’re going to look at other measures as well, for example, the possibility of requiring people to have evidence of a negative (Covid) test prior to travelling from some countries.”

He raised concern that holidaymakers from Northern Ireland are allowed to travel to 59 countries without having to quarantine on their return, while the Republic’s “green list” features 15 nations.

But Mr Varadkar said the Northern Ireland Executive has been “very clear” it does not want to have an all-island approach to its travel arrangements.

He said it will be one of the issues discussed at this week’s North-South Ministerial Council meeting in Dublin.

He added: “Certainly in any conversations that I had with the First Minister (Arlene Foster) and anything she said since, they’ve been very clear that when it comes to travel they want to stick with the common travel area with Britain and won’t be restricting travel between Britain and Northern Ireland.”

Meanwhile, Finance Minister Paschal Donohoe has again moved to defend the Government’s decision not to cut the tourism VAT rate, despite persistent calls from businesses in the hospitality sector.

Mr Donohoe said cutting the standard rate of VAT from 23 per cent to 21 per cent will impact on more businesses and consumers.

However, a number of firms said this will not stimulate more demand for business

Mr Donohoe told Newstalk some retailers will face a choice between implementing a price cut or using the VAT reduction to maintain their employees. - PA