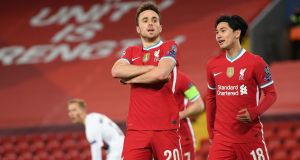 Liverpool made it three wins in three games since losing Virgil van Dijk to injury but Jürgen Klopp faces an anxious wait to discover at what price.

Fabinho, drafted into central defence to provide composure and power in the absence of the Netherlands’ captain, also hobbled off injured as Liverpool maintained a 100 per cent start to their Champions League campaign with victory against Midtjylland at Anfield.

Diogo Jota scored the opening goal – and the 10,000th goal in Liverpool’s competitive history – when he converted Trent Alexander-Arnold’s gift-wrapped assist. Alexander-Arnold also sent Mohamed Salah clear for the 90th-minute penalty that he converted after being tripped by Paulinho. But the injury to Fabinho took the gloss of the triumph for Klopp, who also has Joel Matip on the sidelines.

For the first time in his Liverpool reign Klopp started a Champions League game without any of his established front three. The sight of Salah, Sadio Mané and Roberto Firmino among the substitutes could have been received as a boost or an insult by the Danish champions but that was not the Liverpool manager’s concern. He has the options to rotate in attack, especially with Jota making an impressive start to his Anfield career, and a need to spread the workload in this condensed and intensive season.

There was, fairly predictably, a deterioration in Liverpool’s threat level and incisiveness movement in the final third without three world-class strikers on the pitch. Midtjylland’s defensive organisation, however, was chiefly responsible for the limited influence of Jota, Divock Origi and Takumi Minamino. A relentless, aggressive start from the visitors was another departure from their Champions League group opener against Atalanta last week, when they did not commit a foul inside the first 40 minutes and found themselves 3-0 down at half-time.

There was no doubting Midtjylland’s motivation to make amends at Anfield. The goalkeeper Mikkel Anderson, making his first start of the season with Jesper Hansen injured, only had to collect a routine cross in the opening minute for his team-mates and bench to roar their approval.

They should have had much more to scream about moments later when a long ball out of defence by Alexander Scholz sent Anders Dreyer sprinting through the centre of a non-existent Liverpool defence. The ball sat up nicely for a first-time shot but Dreyer, played onside by Andy Robertson, took the wrong option of controlling with his chest and reducing the angle. Alisson stood up tall and saved the forward’s low shot with his legs.

The visitors continued to swarm over Liverpool in the early exchanges but Klopp’s side began to exhaust the threat and their opponents’ energy by controlling possession and switching play at every opportunity. Alexander-Arnold was Liverpool’s most potent threat in the first half with a series of pinpoint crosses from the right but Minamino was unable to capitalise. The Japan international completely missed one low delivery across the face of goal, but may have been flagged offside had he connected, and steered another well wide with a tame header.

Minamino had another chance when found in space inside the penalty by Jordan Henderson but a loose first touch allowed defender Erik Sviatchenko to cut out the danger and Anderson to collect.

Midtjylland had three players booked before the interval. The last of them, Jens-Lys Cajuste’s lunge on Henderson, sparked a furious outburst from Klopp towards the Danish bench. His patience had already snapped after seeing Fabinho hobble off with an injury Liverpool can ill-afford to be serious. The Brazilian, deputising for Van Dijk, pulled up when chasing back towards his own goal in the 28th minute and was replaced after lengthy treatment by Rhys Williams.

Henderson was able to continue before being replaced by Georginio Wijnaldum during the interval. Liverpool controlled proceedings from the restart, and the Netherlands international introduced himself in an expertly worked breakthrough that left the Midtjylland head coach, Brian Priske, smacking himself in the face with his notebook.

Wijnaldum sprayed the ball out to Alexander-Arnold who passed inside to Xherdan Shaqiri and immediately darted into space inside the visitors’ penalty area. Shaqiri returned the pass to perfection, piercing the Danish defence, and Alexander-Arnold squared across goal for Jota to apply a simple finish for his second goal in successive games at Anfield.

Wijnaldum shone in the central midfield role and almost created a second when he sent Shaqiri charging at the Midtjylland defence. The Switzerland international bamboozled his way past Scholz on the edge of the area only for left back Paulinho to intercept as he shaped to shoot. By this point Liverpool’s attacking armoury had intensified with Mané and Salah replacing the ineffective Minamino and Origi. – Guardian