Drogheda United finally on the up and up after dramatic night 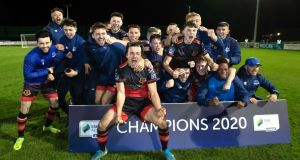 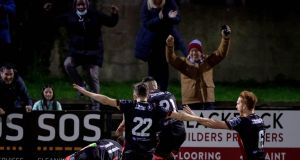 After the trauma of successive playoff defeats to Finn Harps in the two past seasons, Drogheda United made sure of their return to the Premier Division at Stradbrook on Tuesday night.

Firm favourites to go up automatically beforehand, they kept it exciting for a while to be fair, making hard work of scoring an opening goal against a Cabinteely side that had been reduced to 10 men due to Jonathan Carlin’s dismissal, but it was comfortable enough in the end.

James Brown did well to control a Jake Hyland pass then cut inside and find the bottom right corner with a left-footed drive for the first and Brandon Bermingham then teed up Luke Heeney for a very simple header to make it 2-0.

Cabinteely, whose own place in the playoffs hung in the balance right until the end as the sands shifted elsewhere and still does due a Wexford arbitration hearing on Wednesday, got a penalty in the dying minutes but David Olumosu made a terrific save from Kevin Knight to round off a very good night for the visitors.

“They’ve had heartbreak in each of the last two years and a few weeks ago they thought they were out of it so the players deserve this now,” said manager Tim Clancy as the team celebrated around him at the final whistle. “It’s been a short season but a long one too. The lads have been magnificent. I couldn’t put it all into words right now.”

For Bray, who missed out even on the playoffs last year, there is at least that prize this time, although it can’t have felt like much of a consolation at the final whistle of their 1-0 win in Athlone.

Gary Cronin’s side had taken the lead there just before half-time when Ryan Graydon had curled a very fine free-kick into the top left corner and for a short while the goal seemed to have his side on course for a return to the top flight.

It certainly had the First Division trophy en route for the midlands, something especially eager fans could track online but the car it was in was quickly forced into a three-point turn due to events back in Blackrock where it arrived for the presentation with minutes to spare before the lights were due to go out in line with council regulations.

Bray may still go up, of course, but they will have to do it the long way, most likely starting with a playoff game against Cabinteely, something of a relief perhaps given that it looked like being the far more in-form Galway who would take fifth spot for a good portion of the night.

They led UCD for most of the second half thanks to a Stephen Christopher goal but after Evan Weir got two for the visitors, a late Shane Duggan equaliser wasn’t enough to save John Caulfield’s side.

The Students will face Longford, who lost 2-1 in Wexford, in the first playoff round, while the other side to have started the night in contention, Cobh Ramblers, missed out completely when a single goal against Shamrock Rovers II would have catapulted them above Cabinteely.