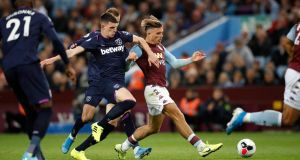 West Ham arrived here on a quest for the victory that would have lifted them to the third in the table but ended up rather relieved to take a point. They did not deserve more. Nor did Aston Villa, and that can only be a frustration to the hosts, who spent the last half an hour mostly failing to trouble 10 men after Arthur Masuaku was sent off.

William McGregor, who is commemorated with a statue outside Villa Park, would have felt a powerful sense of vindication were he still around in the flesh, as the atmosphere of giddy anticipation in the stadium before kick-off offered the latest evidence of the success of the league that the former Villa chairman founded in the 19th century. The stakes have rather changed since then, though, even if folks’ yearning for thrills remains essentially the same; so Villa’s manager, Dean Smith, went into this knowing he needed to demonstrate that his team, which has been expensively remodelled since promotion, are finding their feet quickly in the top flight.

In the most interesting of the two alterations that Smith made to the lineup that started Villa’s defeat at Crystal Palace in their last outing, the manager gave a debut to Marvelous Nakamba, the Zimbabwean who became the club’s 12th summer signing when he joined in August. He stepped into the central midfield slot vacated by Douglas Luiz, who was left on the bench after captaining Brazil’s U-23 against Chile during the international week. Nakamba previously played with Wesley at Club Brugge and Smith no doubt hoped the pair would collaborate here as effectively as they used to do in Belgium, though Nakamba’s primary duty was defensive, with four more advanced midfielders given greater freedom to attack.

Manuel Pellegrini, meanwhile, wanted his team to play pretty much as they did when beating Norwich in their last match. He sent out the same personnel. Here, though, they were the visitors and had to withstand early pressure from hosts whose eagerness was shown by Wesley charging down an attempted clearance by Lukasz Fabianski in the opening minutes.

John McGinn curled the ball into the net in the eighth minute but the referee had already blown for a foul on Angelo Ogbonna. Villa should have scored a legitimate goal moments later after lovely play down the right by Jota and Jack Grealish, the latter especially keen to impress with the England manager watching from the stands. Grealish delivered a perfect cross for Wesley, who made a clever run to meet it, only to head over from five yards.

West Ham, neat and nimble, mounted a counterattack in the 20th minute, Andriy Yarmoleno providing oil in the form of a slick chested pass to Manuel Lanzini on the halfway line. Felipe Anderson crossed to the dangerous Sébastien Haller, who got the jump on Tyrone Mings but nodded wide.

In a contest that fairly rattled along, Grealish, Masuaku and Mark Noble saw yellow in quick succession, and then Anwar El Ghazi risked a red card after thrusting his head at a teammate, Tyrone Mings, seemingly after being criticised for not tracking back. After a review by VAR, Mike Dean let El Ghazi off with another lecture.

Moments later El Ghazi was clobbered, not by Mings but by Fabianksi, who rushed off his line to beat the attacker to a dainty cross by Jota. Just before half-time the goalkeeper was in action again, denying McGinn with a one-handed save.

The helter-skelter quality continued into the second half: someone would have to muster precision if there was to be a breakthrough. Jota and Grealish conspired brightly in the 54th minute but Grealish’s cross lacked accuracy and when the ball ricocheted to McGinn at the edge of the area the Scot shot wide. Then El Ghazi nearly endeared himself to his teammates by racing on to a dinky pass by McGinn and unloading a shot from the edge of the area. Fabianski saved.

Maybe Villa would find more joy against fewer players? Masuaku gave them the chance to find out when, in the 67th minute, he was shown a second yellow for a daft foul on Ahmed El Mohamady.

West Ham readjusted and looked comfortable until two minutes from time when Luiz, on as a substitute, presented Grealish with a chance to plunder victory. But the midfielder botched his volley from 10 yards. - Guardian