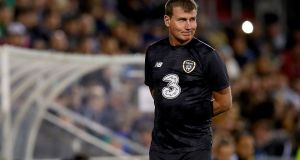 Republic of Ireland under-21 manager Stephen Kenny has been hospitalised in Sweden after feeling unwell as the squad travelled home. Photograph: Tommy Dickson/Inpho

Republic of Ireland under-21 manager Stephen Kenny was hospitalised on Wednesday after feeling unwell at Vaxjo Airport while the squad were travelling home from the Tuesday night’s Euro qualification win over Sweden.

It is understood the team manager had endured minor symptoms leading up to their bus trip from the team hotel to the airport but, once there, the FAI’s medical staff decided to seek treatment at the local hospital.

Most of the squad were in the party heading to Amsterdam for the connecting flight to Dublin but had already proceeded through security when Kenny was taken away for treatment. His assistants Keith Andrews and Jim Crawford accompanied him to the hospital.

By the time the players landed in the Netherlands, they received an update from physiotherapist Kevin Mulholland allaying any potential fears over their manager’s health.

Kenny was kept in hospital overnight and will remain under their care over the new few days.

An FAI statement released on Thursday afternoon read: “Republic of Ireland Under 21 boss Stephen Kenny has remained in Sweden after becoming unwell on Wednesday as his squad made their way home from Tuesday night’s European Championship qualifier in Kalmar.

“Stephen was examined by the FAI’s medical staff and decided to stay behind for treatment at a local hospital. Stephen expects to be discharged in the coming days and is looking forward to beginning preparations ahead of the two European Under-21 Championship qualifiers next month.”

Kenny, due to succeed Mick McCarthy next summer as senior manager, has steered Ireland to top spot in their Euro group. The 3-1 win over the second seeds in Kalmar on Tuesday followed wins over Luxembourg and Armenia.

Ireland welcome top seeds Italy to Tallaght Stadium on October 10th before visiting Reykjavík five days later for a meeting with Iceland. Only the top team is guaranteed a place at the 2021 finals but second will guarantee a playoff. Ireland have never reached a major under-21 finals.

1 Tipping Point: DeChambeau’s transformation raises questions, but who will ask them?
2 Pete Sampras: The forgotten great with the best serve in the business
3 Super Rugby AU offers glimpse of rugby’s future if law changes are adopted
4 Cam Newton broke the mould: Can his flame be rekindled at the Patriots?
5 Mental clarity in chaos: Novak Djokovic, the man who turned two into three
Real news has value SUBSCRIBE
Crossword Get access to over 6,000 interactive crosswords