Meanwhile Ross Barkley denies having a medical at Chelsea despite speculation 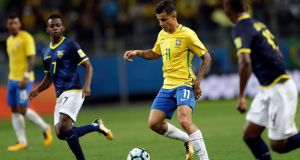 Barcelona abandoned their hopes of signing Philippe Coutinho from Liverpool after the Merseyside club demanded €200m for the attacking midfielder, the Liga side’s director Albert Soler said on Saturday.

The Spanish transfer window shut on Friday night, with Barcelona failing to add to their signings of Ousmane Dembele, Nelson Semedo, Gerard Deulofeu and Paulinho, despite coach Ernesto Valverde stating publicly he wanted a stronger squad after losing Neymar to Paris St Germain for a world record fee of €222m.

According to reports in the Spanish media, Barca made a late bid to try and land Angel Di Maria from PSG although their main target remained Coutinho, who Liverpool coach Jurgen Klopp repeatedly insisted was not for sale.

“Late last night Liverpool priced the player we wanted at €200m, and we decided we would not do it,” Soler told a news conference on Saturday.

“It’s a sign of the new era of football, one which isn’t led by clubs. Something has to change, we won’t play along with this new way of understanding football. We didn’t want to risk the patrimony of the club, a club of 150,000 members which needs to be managed coherently and responsibly.

“We are in a market where you pay 50 million for a goalkeeper. We will not play along with a market that may not have lost its way entirely, but something has changed. This board will not put the club at risk.”

Soler said Barca’s main problem in trying to acquire new players was that other clubs were trying to get more money out of them following Neymar’s world record sale.

He also said football was changing as now wealthy countries, rather than the clubs themselves, were calling the shots. PSG, who are owned by Qatar Sports Investments, not only acquired the services of Neymar but also signed France forward Kylian Mbappe, considered the most valuable young player in the world, on a season-long loan.

“PSG came to us with€222m (for Neymar) and that meant everyone knew we had money. When you go to the market and you have a lot of money, the demands made of you are extortionate. We found ourselves in unbelievable situations,” added Soler.

“What has happened in the market this year takes us to a model of football different to the one we are used to. We used to be the ones that lead the market and now countries and investment funds are leading it. Countries have become the main agents in the football world.”

Barkley, who is currently sidelined through injury, was reported to have travelled to London on Thursday to be assessed by the Premier League champions.

However, the 23-year-old England international took to social media on Saturday to insist that was not the case.

“Contrary to a number of reports in the press, I did not undertake a medical with any club at any point,” Barkley wrote on his official Twitter account.

“I simply decided that due to my injury, it would be best to make a decision on my future and assess all my options in January when fully fit.

“Thanks for all of the support.”

1 Gerry Thornley: Wild reactions to this Ireland team as fickle as the wind
2 Cheltenham keeping a watching brief on coronavirus
3 R&A call for ‘common ground’ on golf’s distance debate
4 Cian Healy out of remainder of Six Nations
5 Dan Tuohy explains ‘rotten to the core’ comments
Real news has value SUBSCRIBE