The phoney war is over. The Premier League is back for real

Transfer window and international break are finished, how are contenders shaping up 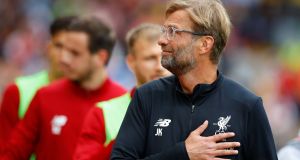 Liverpool manager Jurgen Klopp will be hoping his team can continue their form from before the international break. Photograph: Reuters

August never seems an entirely satisfactory month. The closing of the transfer window and the scramble for last-minute deals always seems to deflect from the matches themselves – although these days, perhaps, it’s the other way round – and then just as everything’s about to get going for real, just as throats have been cleared and vocal chords are warmed up, everybody dashes off to play a series of internationals that, in the year before the World Cup, contrive to be highly significant while feeling like an unwanted distraction.

The phoney war is over. For four months the transfer window is closed and barring the next set of internationals – which at least will determine who is going to the World Cup, making them far harder to begrudge – there is nothing to get in the way of the actual business of trying to win football matches, starting on Saturday lunchtime with a proper heavyweight clash as Liverpool go to Manchester City, the game that last season left Pep Guardiola happier than apparently anything else in his time in England to date, despite it ending in a 1-1 draw.

Quite how happy he is now is hard to say. Guardiola’s moods are highly unpredictable – he can swing from prickly and morose to prickly and fey in the blink of an eye – but even after a summer of unprecedented spending, there is perhaps a slight sense of frustration at failing to complete the jigsaw by landing Alexis Sánchez. Many City managers in the recent past have tried to sign Arsenal’s best forward; Guardiola is the first to fail.

Whether that was to do with Arsenal surprisingly discovering a backbone or unsurprisingly being too disorganised to bring in a replacement is open to debate – and of course it wasn’t Guardiola himself conducting the deal – but somebody who plans so meticulously must have had a specific role in mind for the Chilean.

Given the depth and quality of City’s squad, it should be a minor detail, but the failure to get Sánchez contributes to a sense that Guardiola’s side are, at the moment, falling a little short. There’s plenty of time to get it right, of course, and City are far from the only team lacking a little fluency at this stage, but what’s been striking this season, even as City have had the better of their three league games, is how unlike a Guardiola side they have looked. They’ve been just another very good team, rather than a side intent on expressing a philosophy. Again, that may come, but it may be by design as Guardiola, who has always insisted he is no aesthetic fundamentalist, has adapted to a league that always seemed a little robust for his filigree stylings.

Thrilling as Liverpool have been, meanwhile, they too seem short in one key area. It’s all very well thrashing a supine Arsenal but, however devastating they can be going forward, they appear to lack the defensive resolve for a genuine title challenge. Signing Virgil van Dijk wouldn’t necessarily have changed that, but he has come to represent that concern.

At least Liverpool still have Philippe Coutinho, who along with Van Dijk and Sánchez, will have to work out just how committed he is after a move failed to materialise. Their form will be a major part of the narrative between now and January.

It’s not just City and Liverpool suffering short-blanket syndrome, though. Perhaps that’s simply the nature of the modern super-rich Premier League, that there’s always one area that needs improving, but none of the key challengers can be entirely satisfied. Chelsea perhaps have the best-balanced squad, but it lacks depth, particularly after the failure to sign Fernando Llorente on the final day of the window. Tottenham, despite astute late business, look short of cover at full-back.

Manchester United got their business done early, and have begun with convincing wins over the sort of sides they struggled to dispatch last season, but the suggestion is that José Mourinho wanted another full-back.

Arsenal probably can’t even be considered challengers any more, their shortcoming being basic leadership. The sense of drift that had characterised the decade since the move from Highbury could come to be seen as something far worse should Alex Oxlade-Chamberlain prosper at Liverpool and people begin to ask how many other young talents would have been better off outside the selfie-taking indulgence of the Emirates.

Even at this early stage, Arsène Wenger is far from the only manager under scrutiny. The attempt to turn Crystal Palace overnight from a Sam Allardyce side to a mini-Ajax seems to have unravelled already, with Frank De Boer in danger of his second managerial stint of under three months in a row. Slaven Bilic’s position is under threat as well, although a truer picture of just how bad West Ham are will come when they’ve played a home game.

Potential sackings, crisis clubs, signings that absolutely have to be made in January – the soap opera is back in full flow. The awkward opening scene is over and September is here.