United manager says his goalkeeper wants to stay at the club 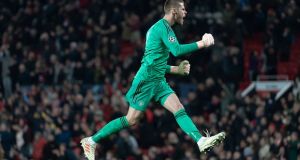 Marouane Fellaini may have been Manchester United’s stoppage-time saviour but José Mourinho paid tribute to goalkeeper David de Gea after the narrowest of victoriesy over Young Boys of Berne.

De Gea showed tremendous reactions to stop a deflected shot from Ulisses Garcia right on the line in the 70th minute, and Mourinho felt a save ratified by goalline technology might have been the crux of the evening.

“Without David’s save, no winning goal either,” the United manager said. “He is a world-class goalkeeper, probably the best in the world, and that’s exactly what you need if you want to be a big club that wins things. I know he is happy here, I know he wants to stay, and I know the board are working to make that happen.”

Luke Shaw also praised De Gea’s contribution, though was honest enough to admit United should have been coasting by then. “We had the chances to be three or four goals in front but we still needed that unbelievable save from David,” the full-back said.

Mourinho accepted that his side “suffered a lot” in qualifying for the Champions League knockout stage with a game to spare, and claimed “relief and frustration” were behind his histrionic reaction to the winning goal, where he kicked and threw drinks crates on the touchline. “We don’t score enough goals and it makes things difficult, but all my players were very tired at the end and I like that,” he explained.” “I want them to give everything.”

There was a suggestion of handball in the only goal, though naturally the player involved denied it. “It touched my hand, but for me it was not handball,” Fellaini argued. Mourinho had the last word, as he so often does, by pointing to his record in Europe: “This is my 14th season in the Champions League, and the 14th time my team has qualified for the knockout stage,” he said. “In two other seasons I was in the Europa League and both times I won it. So that’s 16 years of success. Just a little curiosity for all my lovers to note.” – Guardian service

1 Ken Early: Handball ‘crisis’ a timely distraction from the grim bigger picture
2 The Offload: Springbok heavyweights heading for Pro14
3 All Blacks facing a Christmas in quarantine
4 Exeter coach Baxter calls for an end to mass Covid-19 testing in rugby
5 All in the Game: No sympathy from Bruno Fernandes
Real news has value SUBSCRIBE