Brendan Rodgers sent out an attacking XI against struggling Belgian side 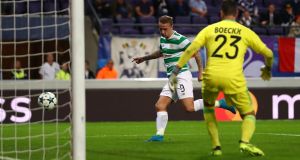 Celtic have enjoyed so few successes in Champions League away matches that they are entitled to cherish this one. The response to the mauling at the hands of Paris Saint-Germain was supplied on an ultimately comfortable evening in Brussels.

This was Celtic’s second win in 28 attempts on the road in the competition. It was also their first in five years. Wider context is positive for a team who enjoy such dominance in Scotland that ability is often underplayed. On this evidence, Celtic are vastly superior to Anderlecht. Another away trip, to Munich next month, suddenly carries heavy significance.

At face value, Celtic were facing a team in disarray. Anderlecht’s dismal opening to the season means they sit seventh in the Belgian top flight and without a permanent manager. Unsurprisingly, Brendan Rodgers stressed before kick-off that they remained formidable. And yet Rodgers’s deployment of such an attacking XI – Scott Sinclair, Tom Rogic and Patrick Roberts started in support of Leigh Griffiths – suggested he sensed some vulnerability.

The opening exchanges did little to remove any sense that this represented the first of two Europa League playoffs for the teams. It was scrappy, with the failure to retain decent possession even more striking on a perfect playing surface. It took 31 minutes for either goalkeeper to be called into action, Anderlecht’s Frank Boeckx saving comfortably from a long-range Olivier Ntcham drive.

Celtic breached the first-half tedium with a fine move that deserved its reward of the opening goal. Ntcham, who had been struggling more than most, played a terrific pass to the marauding Kieran Tierney. The left back’s low cross found Griffiths at the back post, with the striker taking a single touch to convert.

Anderlecht could have restored parity within a minute, Craig Gordon holding an attempt from Sofiane Hanni. Their captain should have done better having permitted himself space and time.

The home side opened the second period with a brief vigour not witnessed in the first. A dipping, swerving shot from Hanni caused Gordon problems before Celtic produced a response sufficient to settle any nerves.

Dreadful defending played a key part in that second goal, Olivier Deschacht miscontrolling a pass from Leander Dendoncker to the point where Roberts could pinch possession. The Manchester City loanee who, like Ntcham, had not been enjoying a terribly profitable night, lashed a shot that deflected in off Serigne Mbodji. That may have been pertinent but there was little doubt as to where the blame lay; Deschacht was replaced moments later.

Anderlecht huffed and puffed in search of salvation that never really looked like arriving. A perfect night for Rodgers was completed by Sinclair, who clipped home from an Ntcham pass.

Team maturity, as regularly cited by Celtic’s manager, had been perfectly illustrated.