Romelu Lukaku and Manchester United continue to motor on 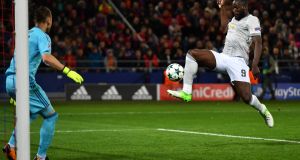 Manchester United have maximum points from their two Champions League outings and return home from Moscow in buoyant mood. From first to last whistle they coasted to a win that means José Mourinho’s side have now scored 28 goals in nine outings.

They owed this victory to the superb Anthony Martial who created each of Romelu Lukaku’s goals, scored a penalty himself, and generally terrorised CSKA Moscow whenever he took possession.

Mourinho had made five changes from Saturday’s 1-0 win at Southampton. Marouane Fellaini, Phil Jones and Antonio Valencia did not travel due to injury and Marcus Rashford and Juan Mata were dropped to the bench. In came Chris Smalling and Victor Lindelof to a three-man defence, while Mourinho also drafted in Blind as left wing back, Ander Herrera into midfield, and Martial to attack.

United made an excellent start and would return a fine first half of their second Group A game. Their opening goal came as early as the fourth minute and was started and finished by the ever-excellent Lukaku. The No 9 drifted deep and spun a pass out left and in behind the CSKA defence, perfectly weighted into Martial’s path. The Frenchman cut inside and with his right boot dropped the ball on to the head of Lukaku, who beat Igor Akinfeev to the goalkeeper’s left from a few yards out.

Mourinho turned away from the technical area unmoved but surely content inside and he had reason to be pleased with what happened next, too, as David De Gea ensured the lead was not conceded within a few seconds. CSKA attacked and an Aleksandr Golovin mis-kick became a pass that rolled to Alan Dzagoev. The No 10 pulled the trigger but De Gea dived superbly to his right to steer the ball out for a corner.

CSKA gained nothing from this and United then pinned them back for virtually all of the period’s remainder. The home defence had to work hard to stop Martial after Henrikh Mkhitaryan had won a corner and United should have gone two up shortly afterwards. Daley Blind advanced up the CSKA right and slipped the ball in to Mkhitaryan but he failed to beat Akinfeev from short range.

Mourinho wheeled away with a hand in the air showing his disappointment but moments later Mkhitaryan was upended by Georgi Schennikov in the area and Jonas Eriksson pointed to the spot. The referee was booed and so too was Martial but the Frenchman coolly rolled the ball to Akinfeev’s left as he dived right.

Despite this awful start from their side the crowd continued to roar their team on, though it was quietened by United’s third. This came too easily for this level of football as CSKA again succumbed to the Martial-Lukaku combination. The No 11 bounced a cross in, Vasili Berezutski air-kicked the ball, and there was Lukaku for a 14th goal in 11 appearances this season, his 10th in nine for United. He was close to a first United hat-trick when later taking aim from 25 yards, Akinfeev scrambling to his left to beat the ball out.

De Gea’s class is such that when called upon after all of this he could still react expertly to keep out a Fedor Chalov effort and at the break it remained 3-0, with the contest surely over.

CSKA’s sole hope appeared to be to try and nick one back early in the second half and see where this might take them. They swept forward in search of this in a move that ended with Golovin firing over De Gea’s bar from outside United’s area. Yet this was a brief respite as the Martial-Lukaku axis came close to breaching CSKA again when some razor-sharp play ended with the former snapping a pass to the latter’s right before Akinfeev and the Belgian should have hit the net rather than the goalkeeper.

Next up was Ashley Young, the right wing back and United’s captain for the night, swung a rare cross in from his side and Blind rose though he failed to direct his header. When Mkhitaryan smashed home United’s fourth after Martial’s attempt was repelled by Akinfeev this became the proverbial stroll for United.

This proved the Armenian’s last act as Jesse Lingard replaced him. From here United toyed with Russia’s second placed side of last year though there was disappointment when Konstantin Kuchaev scored with a low shot from a narrow angle near the close.

1 Little consolation for dethroned Man City as they thrash Liverpool
2 Sheffield United back on European track as they sink sorry Spurs
3 FAI board gives green light to League of Ireland restart plan
4 TV View: Man City provide the fireworks in a hard sell for Sky
5 Sebastian Vettel: This Formula One season could be my last
Real news has value SUBSCRIBE