Premier League round-up: Hendrick gets winner as Coleman sent off 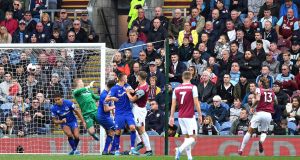 Jeff Hendrick grabbed the winning goal for Burnley against Everton in a clash at Turf Moor that saw his Republic of Ireland teammate and captain Seamus Coleman sent off after picking up two yellow cards.

Hendrick’s 72nd-minute volley from gave Burnley all three points, condemning Marco Silva’s side to a fourth straight defeat. The result leaves Everton languishing in 17th place, a point above the relegation zone, while Burnley extended their unbeaten run to four games and moved up to fourth place ahead of Sunday’s games.

Gylfi Sigurdsson tested Burnley keeper Nick Pope with a free kick and, at the other end, Hendrick went close with a back-post volley from a corner which was kept out by the legs of Everton keeper Jordan Pickford but openings were rare in the first half.

Everton were reduced to 10 men in the 56th minute when captain Coleman was given a second yellow card for a reckless aerial challenge on Dwight McNeil. Ashley Barnes then found space in the Everton box but blasted high and wide as the pressure from Burnley increased against an Everton side looking well short of confidence.

The goal came via an Ashley Westwood corner which was met by a totally unmarked Hendrick at the back post, the Ireland international doing well to volley in from a tight angle.

Republic of Ireland midfielder Conor Hourihane was on the scoresheet as Aston Villa Villa thumped injury-hit Norwich City 5-1 at Carrow Road for their biggest Premier League away win in 11 years.

Brazilian striker Wesley scored twice while Jack Grealish, Hourihane and Douglas Luiz completed the rout, with Josip Drmic scoring a late consolation for Norwich who looked a shadow of the side who had beaten Manchester City in their previous home game.

Wesley, who has now doubled his Villa goal tally, was criticised for a slipshod performance against Burnley last weekend but justified manager Dean Smith’s faith with his first-half strikes.

On 14 minutes he brought down Anwar El Ghazi’s cross to rifle past Michael McGovern, Norwich’s third-choice keeper making his Premier League debut for the club at the age of 35.

Wesley took advantage of good work from Hourihane to double Villa’s lead on 30 minutes but then had a penalty well saved by McGovern, who also did enough to ensure Wesley’s follow-up shot ballooned over the bar.

Grealish side-footed home his first top-flight goal in four years for Villa’s third just after the break before more bad defending allowed Hourihane to hit their fourth. Luiz’s 83rd-minute thunderbolt delighted the noisy away support as Villa leapfrogged Norwich to move out of the relegation zone.

Watford and Sheffield United played out a 0-0 draw at Vicarage Road to leave Quique Sanchez Flores’s side at the bottom of the standings, still searching for their first Premier League win of the season.

The result extended the Blades’ unbeaten run on the road to four games since their return to the top flight - with three draws and a win - as jeers rang around the ground from the home fans at the final whistle.

Andre Gray had the best opportunity to put Watford ahead in the ninth minute when Roberto Pereyra set him up for a tap-in but the English striker blazed over from inside the six-yard box from an offside position. Despite being the home side, Watford were set up to defend deep and it was the visitors who dominated possession and had two shots on target in the first half.

The first few minutes of the second half brought a flurry of chances, with goalkeeper Dean Henderson saving a one-on-one opportunity from Watford’s Danny Welbeck before Callum Robinson’s half volley at the other end was hit straight at Ben Foster.

Watford’s Gerard Deulofeu was introduced in the second half and United manager Chris Wilder brought on striker Billy Sharp in search of a goal but neither side were able to find a breakthrough even after five minutes stoppage time.