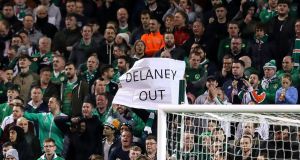 There will be few tears shed at the news that John Delaney’s decade and a half at the helm of the FAI is finally at an end. The 52-year-old ended a few other people’s careers in the place and none of them got to walk away with a severance package worth an estimated €500,000.

A couple of years back, Delaney told a member of the Oireachtas Committee for Sport, who had asked about the pay and pension cuts imposed on more run of the mill staff out at Abbotstown, that everyone there understood what a privilege it was to work in football and that it was not about the money.

In the end, though, the organisation was pretty much brought to its knees during his time in charge.  Uefa are set, it seems, to loan it anything up to €20 million in order to keep the show on the road.

Delaney received in excess of €6 million in basic salary alone during his time as chief executive and still it took the promise of another half a million to ease him out the door.

Others in his position might have sought to claim that they had delegated to middle managers who were ultimately the ones to fail, but his management style had been hugely hands on, with barely a decision of any real significance taken at the FAI in recent times without it having to be “run past John”. Trying to blame others now would be ridiculous.

And anyway, Delaney consistently claimed almost exclusive credit when people were persuaded that things were good.

He once told journalists who were beginning to express scepticism about the 10-year ticket scheme - the failure of which would ultimately contribute so much to the financial troubles that engulfed the association - that the big difference between them and him was that he had built a stadium.

The government and IRFU might both have had clarifications to offer on that one, of course, but the bigger issue was that he never came up with an alternative way of  paying for the FAI’s share of what became the Aviva. The growing chaos behind the scenes eventually culminated in him having to write a cheque to his employers for €100,000, something that would set in motion the chain of events that led to his downfall.

The scale of what has emerged since has surprised even his critics, although much of it has remained anecdotal. The detail should start to be crystalised on October 7th when the first of a series of reports into the association’s affairs and accounts is due to be published.

Next week's report was commissioned by Sport Ireland (and carried out by Newry accountancy firm KOSI) who came under pressure from Oireachtas committee members to investigate the background to the association’s crumbling finances in forensic detail.

Given the stories that have emerged so far about his expenses, it seems unlikely that Delaney will emerge well from it. Other investigations, such as the one currently being carried out by Mazars, may give a broader sense of the structural problems that developed at the organisation. The most critically important one from Delaney's point of view will be the one by the Office of the Director for Corporate Enforcement, for it could ultimately give rise to criminal prosecutions.

Michael Cody and Eddie Murray, formerly the association’s honorary secretary and treasurer respectively, were key figures in facilitating Delaney’s way of doing things and both clearly have questions to answer about the way they performed roles that have significant responsibilities under company law. Nobody from the association’s board, though, really emerges with very much credit, even if a couple of the directors weren’t there nearly as long as the others and some were beginning to wake up to what was going on slightly before the rest.

Donal Conway does not score highly on either front. Still, the former teacher is widely regarded as having thrown himself into the task of turning things around and the sense is that important progress has been made, if only in assessing just how bad things had really become.

On one level, the fact that he has shown himself to be so capable over the course of the past few months only adds to the mystery as to how he did not do more when things were obviously out of control beforehand. There are certainly those who believe he became far too close to Delaney for either his or the association’s good.

In the end, though, it was Conway and long-time critic Paul Cooke, now vice-president of the association, who led its side of the negotiations that led to Delaney’s departure. It has come at a high price to an organisation that can ill-afford big settlements right now, but the alternative of sacking the former CEO and then fighting him through the courts if necessary was, however attractive it clearly was to many in the game, hugely risky and the FAI could certainly not have afforded to lose.

As it is, there is huge work still to be done to rehabilitate the association in the eyes of the public and to fundamentally change the culture around the place. Every member of “the football family” that Delaney used to go on about - the staff, the players, the fans -  all of them deserve better. The appointment of  independent directors in the coming weeks and the start of the search for a new chief executive, also expected to get under way in October, will be key elements of the process.

But it’s this weekend’s element that will be the one that is most remembered.

March 16th: John Delaney fails in an attempt to obtain a High Court injunction preventing the Sunday Times reporting that he had - two years previously - written a cheque to the FAI for €100,000.

March 23rd: Immediately after Ireland win in Gibraltar, the FAI issue a statement to the effect that Delaney has stepped down from the position of CEO to take up the specially created position of “Executive Vice President”.

April 10th: Delaney appears as part of an FAI delegation in front of the joint Oireachtas Committee on Sport with his lawyer and refuses to answer questions from the committee’s members.

April 15th: Amid a growing sense of crisis around the association, Delaney goes on “gardening leave” – on full pay – while a number of investigations proceed at Abbotstown.

July 27th: The bulk of the association’s old board is replaced at its AGM although former Delaney ally, Donal Conway, stays on as president.

September 28th: Conway and new vice-president, Paul Cooke, a long-time critic of Delaney’s, lead the FAI’s side of negotiations which produce a deal that leads to the former CEO’s resignation after 15 years as its dominant figure.