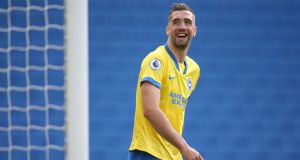 Shane Duffy shares a joke with the fans during the Brighton’s pre-season friendly against Chelsea at the Amex Stadium. Photograph: Steve Bardens/Getty Images

Celtic are believed to be close to agreeing terms with Brighton to take Republic of Ireland defender Shane Duffy to Scotland on a season-long loan.

Brighton boss Graham Potter played down talk of the 28-year-old leaving over the weekend but acknowledged Duffy was keen to get more game time after having lost his status as an automatic starter at the club last season. The Derryman’s prospects for the coming campaign are not helped by the return to the club of Ben White, who impressed at Leeds last season, and the arrival of Dutch international Joel Veltman from Ajax.

Duffy is widely reported to have attracted interest from West Ham and newly promoted West Brom but it is understood that the player is keen to join the club he supported as a boy.

Brighton, though, are seeking a significant loan fee and would require that a large portion of Duffy’s wages, which are said to be something approaching €50,000 per week, be covered.

The expectation is that Celtic will agree to pay more than €2 million and more than half of the player’s salary and that the move would be completed when Ireland’s games against Bulgaria and Finland are out of the way.

Hibernian manager Jack Ross, meanwhile, has confirmed that Daryl Horgan is on the verge of a return to England. Wycombe Wanderers, who have been on something of a spending spree after having won promotion to the Championship for the first time in their history, are reported to be his most likely destination.