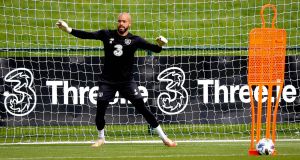 After one team meeting and a training session, Darren Randolph admits that many of the Irish players are still in the very early stages of getting to know Stephen Kenny, but the West Ham goalkeeper insists that they will happily embrace an approach that revolves around them getting to express themselves more.

The new Republic of Ireland manager outlined on Sunday evening what he believes an Irish team of his should look like, and the job of reshaping things began on Monday morning when Damien Duff and Keith Andrews joined him for the opening training session of the week.

“Stephen took most of it,” says Randolph of the session, “but Keith and Damien both had their say in different parts. They very much work together and give their points of view on what they are trying to coach. They seem to be quite hands-on.”

The 33-year-old acknowledges that it is all still bound to be a work in progress come kick-off time in Sofia against Bulgaria in the Nations League on Thursday, but reckons that players are naturally inclined to embrace a philosophy that involves them being asked to believe in themselves.

“He said he wants us to have more belief,” says Randolph, “to go out there and play more on the front foot, and he’s obviously going to try to play to our strengths; probably more building it out from the back. I think he just wants to be a bit more creative and use the players that we have in positions that he sees fit for them to perform best in.

“It’s just a shame we don’t have a slightly longer training camp to really go over things. The games come thick and fast, but we definitely know what he wants from us and what he expects.

“We’ve been very strong defensively, that’s one positive, and I know the manager is keen to work on different attacking options, he wants to create more chances. That will be one area he is looking to work on.”

Goals have certainly been an issue for the team and the prospect of being encouraged to pursue them a little more adventurously would be an enticing one for most teams, but Randolph doesn’t think Kenny will be ditching Ireland’s traditional strengths as he seeks to transform the team’s style of play.

“It sounds like the perfect manager, and yeah, we want to play, but we won’t be taking stupid risks. International football . . . there’s stuff to play for. We want to be a possession-based team and we want to try different things, but it won’t be anything ridiculous. There will be a slight change in what people are used to seeing,” Randolph says.

Defensively, it is far from clear whether there will be any substantial change at all. The new manager, who called Liverpool goalkeeper Caoimhín Kelleher into the squad on Monday to replace the injured Kieran O’Hara, has heaped praise on Randolph and his back four and strongly suggested he would keep things as they are.

Using wing-backs would allow him to start Matt Doherty and Enda Stevens in the positions to which they seem best suited, and Kenny hinted that he was considering the switch on Sunday when he suggested that Séamus Coleman could play in a three.

Randolph insists he is no wiser than the rest of us, but seems content that he will retain his starting spot despite struggling somewhat to get game time since his January transfer in England.

“I’m used to having to fight,” says Randolph, who fought his way into West Ham’s first team during his first stint there, “and I’ll continue to do so until I get my chance again.

“You have to have confidence in yourself. I wouldn’t have gone back if I didn’t think it was possible [to displace Lukasz Fabianski]. Listen, whether it happens or not, that’s another thing, but I have belief and that’s obviously why I went back there.

“If you’re asking me [will he lose his Ireland place if he does not regain his West Ham one] I’ll say ‘no’, but then that’s the question for the man who picks the team.”

Randolph does, at least, arrive home having played in a couple of preseason friendlies, although the schedule of the seasons has become so mixed up he admits to not feeling entirely sure whether he is starting out on one campaign or still struggling to complete the last one.

An international window in early September without a Premier League game having been played probably compounds the sense of confusion, but the former Middlesbrough and Birmingham City goalkeeper insists that with the stakes so high in Ireland games to come, neither the timing of the matches nor the fact that they will be played behind closed doors will be a distraction.

“It can definitely be difficult to realise how big the game is because you haven’t got the atmosphere,” he says, “but then again, you shouldn’t need the fans cheering loudly to remind you of that . . . especially going into the international games.

“It would be different if it came to the end of the Premier League season and you were sitting in mid-table with nothing to play for, but when you’re going into international games, Nations League games and eventually the [European] qualifying game against Slovakia with no fans, you have to kind of look past that at the bigger picture and that should be motivation enough.

“As the manager said in the meeting, the things this group could achieve over the next few years should be enough incentive anyway to go out there and deliver; to put in a shift and put on a show.”