FAI facing long road ahead as it seeks to rebuild trust 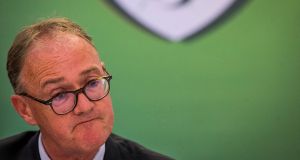 FAI chairman Roy Barrett: Question of his nomination as chair could be up for renewed discussion at Tuesday’s board meeting. Photograph: Ryan Byrne/Inpho

The FAI will look to draw a line under what has been another difficult and deeply divisive period for the organisation at its much-anticipated extraordinary general meeting on Monday. Structural changes relating to the memorandum of understanding (MOU) with the Government are likely, though not quite certain, to be endorsed by delegates after conditions contained in the document were further eased over the weekend.

News that council members with 10 years’ service need not make their exit for another couple of years seems far less significant in real terms than the previous announcement that the board’s casting vote is to be switched from its chairman to president. In terms of the FAI’s internal politics, though, it represents a belated acceptance that the compromise negotiated by Donal Conway last year was necessary for the organisation to bring some of its old guard with it on at least the first stage of what everyone hopes with be its journey to a brighter future.

It remains to be seen if the schoolboy sector will accept that its de facto leader John Early will, as a former director, be excluded from any prominent position, as still appears to be the case.

The peace, in any case, may be broken in private at Tuesday’s board meeting when the question of Roy Barrett’s nomination as chair could well be up for renewed discussion.

Among the items delegates will be voting on at Monday’s egm is an electoral code intended to set in place principles “including but not limited to the separation of powers, independence, transparency and the obligation to avoid situations or perceptions of conflicts of interest”.

This is specifically related to the future selection of the association’s key office-holders, directors as well as members of other committees, but how much better it might have been for the organisation had Barrett himself been obliged to live by the spirit of that provision over the past eight months.

As it is, he has never completely persuaded the sceptics about his handling of the talks with Government or his role in Gary Owens’s appointment, and now it is suggested that he effectively owes his position to a recommendation from the chairman of the association’s largest creditors.

More fundamentally, he, Owens and Niall Quinn, all originally part of the “Visionary Group”, are still widely perceived to have attempted a takeover of the association, taking key roles and substantially altering the direction of governance reform without any obvious basis or authority. The suggestion is repeatedly denied by them, while opponents argue that if it both walks and quacks like a duck . . .

Either way, if appearances and transparency really do matter, then it is far from perfect stuff.

They have been helped by the negative light in which the current board seems to be viewed, with its members still tarred in the public mind by the wholesale failings of their predecessors. Some certainly did more than others to raise the alarm while John Delaney was running riot for all those years at the association, but all might claim that they were left high and dry by the Government and Sport Ireland, both of which knew that huge damage was being done under the previous chief executive even before the detail and scale of the problem had become apparent.

Both now seem to see the need to have 50 per cent of the board made up of independent directors as self-evidently obvious, but the Department of Sport had a significant hand in giving the CEO role to Delaney at a time when many were already raising red flags about his methods, and it is hard to recall anyone from either body raising much of a fuss as he then quietly buried the Genesis report’s recommendation for two independents.

Had they acted decisively then and insisted on public representation, it seems fair to say that much of what transpired subsequently during his reign could not possibly have happened.

There is still a very long way to go in working out the relationship between the various parties, but the association’s hopes of receiving the sort of support it requires, and that football in this country deserves, will not be much advanced until all the internal wrangling is addressed and it can present a united front when making its case.

Barrett, Owens and Quinn may well deserve credit for their part in avoiding an actual financial collapse which was said to have only been a matter of weeks away, but there are still those who believe the debt will take decades to repay, if it can be repaid at all, and the current crisis is such that the agm must be deferred to October so that Government money can be drawn down in order that the auditors can safely express the opinion that the FAI is a going concern.

There is, in short, a long road still to travel and a great deal of trust to be built on all sides.