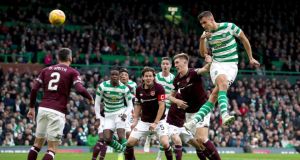 Odsonne Edouard scored twice as Celtic thrashed Scottish Premiership leaders Hearts 5-0 to narrow the gap between the top two to a single point.

A fine hit from Edouard got Celtic rolling in the 18th minute and it was not long before on-loan Leicester defender Filip Benkovic opened his account for the Hoops with a header past Zdenek Zlamal.

Brendan Rodgers’s men were three goals up six minutes before half-time when Edouard clipped home from close range and James Forrest rubber-stamped the outcome with a neat finish after the hour mark.

At the death there was even time for Ryan Christie to add gloss to the scoreline from the penalty spot.

Earlier, Daniel Candeias and Alfredo Morelos both struck late on as 10-man Rangers returned to winning ways with a 2-0 triumph at St Mirren.

Substitute Candeias beat Craig Samson with 10 minutes to go before Morelos made certain of his team’s first win in four games. Candeias was then sent off following a spat with Anton Ferdinand.

Neil Lennon’s bad week took a turn for the worse as his Hibernian side were sunk 1-0 by St Johnstone by a late goal from former Ireland under-21 defender Joe Shaughnessy in Leith.

The Hibs boss was struck by a coin during the derby draw with Hearts on Wednesday and he was unable to find a tonic against St Johnstone, who climb above the Edinburgh club to reach fifth place.

Danny Swanson had earlier missed a spot-kick for Saints, but Shaughnessy spared his blushes late on.

Motherwell recorded back-to-back wins as David Turnbull’s second-half goal settled a 1-0 victory at home to basement boys Dundee, while Hamilton are hot on the Steelmen’s heels after beating Livingston by the same scoreline thanks to substitute Mason Enigbokan-Bloomfield’s last-gasp winner.

Mickel Miller was sent off for Livi at New Douglas Park before Norwich loanee Enigbokan-Bloomfield bagged his first goal for Accies.

1 Ireland 23 Georgia 10: How the Irish players rated
2 Ireland grind their way to grisly win over Georgia
3 Jim McGuinness: There is a way to save championship and make it competitive
4 No fireworks but Limerick get the job done against Galway
5 Car sliced in half but Grosjean survives huge crash at Bahrain Grand Prix
Real news has value SUBSCRIBE
Crossword Get access to over 6,000 interactive crosswords