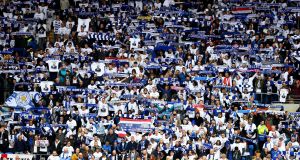 Claude Puel praised Leicester’s self-control after their “tough week” following the death of owner Vichai Srivaddhanaprabha ended in a 1-0 win at Cardiff.

Leicester returned to action for the first time since Srivaddhanaprabha and four others were killed in a helicopter crash outside the King Power Stadium last weekend.

Demarai Gray struck the 55th-minute winner on an emotional afternoon for everyone connected with the Premier League club.

“It was tough all week,” Leicester manager Puel said. “We went step by step, we came back for training and worked together.

“All the players were devastated on Monday, but we got back training and we had to prepare for the game.

“We had to keep our self-control, it would not have been possible to succeed if we played this game on emotion.

“It was important to find the balance between emotion, self-control and desire.

“I am happy we managed to do this and it was great to experience this result with the fans at the end, because it was all the family together to honour our chairman.”

Gray, under disciplinary protocol, was booked by referee Lee Probert for removing his shirt after scoring.

The forward paid tribute to Srivaddhanaprabha with the words ‘For Khun Vichai’ written on the top he was wearing underneath.

But Puel said he accepted the yellow card as “we played like professionals and it was important for the referee to be professional too”.

Leicester’s players and management staff were beginning the long journey to Thailand on Saturday night to attend Srivaddhanaprabha’s funeral in Bangkok.

“We will come back in the middle of the week and then we have to prepare for a game [against Burnley] in front of our fans,” Puel said.

“It will be tough but we made our first step today, and now we have to manage the next week in the right way.

“But I think it is fantastic to finish this game and this situation with a win and a good game.”

Cardiff dropped into the relegation zone as Newcastle climbed above them after recording their first win of the season.

Bluebirds boss Neil Warnock said some of his players had also been affected by the Leicester tragedy as “training had not been the same”.

“It’s been a strange week, surreal really, and I’m glad it’s out of the way if I’m honest,” Warnock said.

“I thought the fans were amazing in the circumstances, the respect they showed and the way they were together. It was quite emotional out there.

“The players gave everything but it’s been difficult this week, three or four lads in particuar.

“Whether it’s triggered things up I don’t know. But training’s not been the same and we had to have a word with them that we’ve got to play the game.”