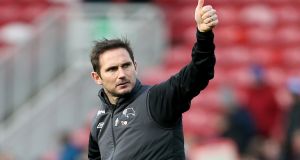 It will feel nice,” says Frank Lampard, chuckling a little sheepishly when asked about the inevitable moment when the Chelsea supporters sing his name on his Stamford Bridge homecoming.

“I always appreciated it as a player. You work as a player to try to please the fans. They pay the money to come and watch you – they are the club. To be getting that support after, when you are working for an opposing team, yeah … it will be nice.”

The corresponding “Super Frankie Lampard” banner will doubtless be draped across the Matthew Harding Stand, opposite the Shed End, on Wednesday evening. As Lampard puts it, going back to Chelsea with Derby – in only his 19th competitive match as a manager – is a big deal.

In his first game in charge, at Reading in August, he masterminded the art of the smash and grab, and since the birth of his daughter, Patricia, six weeks ago, he admits to being torn over formations at 3am while on bottle duty. It has all been quite an induction to life in the technical area. His team are in a good place, though, unbeaten in five matches and having lost once since that penalty shootout win at Old Trafford in the previous round.

The Carabao Cup fourth-round tie will see the 40-year-old reunited with what he describes as “40,000-plus friends”, having exchanged messages in the buildup with old Chelsea colleagues, including Billy McCulloch, the masseur, and the long-serving press officer, Thresa Conneely. “I will feel proud and honoured to be taking my team and going to a place I called home for 13 years, and it still feels like home,” Lampard, Chelsea’s record goalscorer having struck 211 times in 648 appearances, says. “This [DERBY]is my working home now and I’ve got a great affiliation with this club already but I can’t forget 13 years of my career. It was a very special time for me. I was lucky to be part of such a strong era at the club. It will be very special to be back there and feel that atmosphere again.”

It will be strange, though not a totally foreign feeling for Lampard having played and scored against Chelsea with Manchester City in the twilight of his career four years ago. “I think it is slightly different as a manager,” he says. “There were mixed emotions on that day, certainly, because I was doing my job for Man City. Everybody knew I was a Chelsea man and, if I had had my way at that point, I would have stayed there until the end of my career.

“It didn’t work out that way, so to go up against them and score was a difficult one for me. I was doing my job but I love Chelsea as a club; I have a strong bond with the fans that will hopefully never go. But as a manager, it’s my job. It’s up to my players to go and perform and it’s my job to prepare them.”

As Lampard is keen to stress, it will not just be a special game for him but also his assistant, Jody Morris, the former Chelsea midfielder and more recently the under-18s manager, plus the first-team coach, Chris Jones, who spent 12 seasons at the club.

It will also be a unique occasion for Mason Mount, the talented teenage midfielder called up to Gareth Southgate’s England squad earlier this month, and Fikayo Tomori, who have both been granted special permission by Chelsea to play against their parent club. For Mount, who has excelled on loan in the Championship this season, it is another opportunity to impress against what could be a midfield axis of Cesc Fàbregas, Mateo Kovacic and Ross Barkley.

In defence, it will be another test for Jayden Bogle, though the 18-year-old ably coped with Jesse Lingard and Anthony Martial in the previous round. As for Mount, Lampard believes his work rate without the ball continues to mark him out from the crowd. “Mason can be very special,” he says. “All of the signs are there.”

Arguably the biggest compliment that can be afforded to Lampard, still so early in his shelf life as a coach, is that the imprint he speaks of Maurizio Sarri establishing on his former club can be said for him and his Derby side; his footprints are all over what is a vibrant and tenacious young team. Lampard and his staff are demanding on the training ground and forensic in their match preparation, with detailed individual player analysis.

Tom Huddlestone, the Derby midfielder, tells the story of how Lampard and Morris expect 100% even during just a routine passing drill. “When we watch the videos back, we see if players aren’t fully putting it in,” Huddlestone says, “so I think that keeps everybody on their toes, not wanting to get a telling off.”

Lampard simply wants his players to be brave and fearless but also focused. “We have to work harder than everybody else and that can only be done if you train hard,” he says. “When we do play the videos back, the West Brom [WIN], I didn’t show them the four goals we scored, I showed them the moments when we won the ball back, because everybody collectively sprinted after it, sprinted back, sprinted there, sprinted here. I get more enjoyment out of that than I do Harry Wilson’s free-kick against Manchester United.”