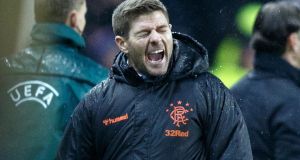 Incongruous though it feels to state Celtic and Rangers can be happy, mutual cohabitors anywhere, the Europa League has supplied the perfect backdrop as a domestic title race – for now – rumbles on. The Old Firm’s progression to the last 32 of Europe’s second-tier domestic competition has left supporters and supposedly neutral onlookers grasping for superlatives. We’ll be subject to a few more days of this yet.

Steven Gerrard can be forgiven giddy analysis, given it arrived in the immediate aftermath of Rangers’ 1-1 draw against Young Boys. It is, Gerrard insists, a “magnificent achievement” for his team to reach the knockout phase from a section which featured Porto and struggling Feyenoord. The former Liverpool captain over-egged his theory that Rangers were written off before a ball was kicked in Group G, with nothing in subsequent matches suggesting any of the competing sides will trouble the judges as the Europa League hurtles towards its conclusion.

Rangers have endured a lengthy European run, given qualifying matches started on July 9th, but whereas seeing off Midtjylland and Legia Warsaw represented decent results, we shouldn’t be kidded that St Joseph’s and Progrès Niederkorn were serious opposition.

Across the city, the attitude shift has been hilariously stark. Elimination from the Champions League at the qualifying stage in August was treated as an affront to Celtic, just as it was put forward as a serious blemish on the record of Neil Lennon. The harsh reality is that Celtic’s recent Champions League proper campaigns saw them routinely reduced to cannon fodder. The Europa League is a more appropriate environment, as Lennon and his players quickly grasped. Victory against Lazio in Rome was the peak result of their group campaign as qualification was sealed with two games to spare.

“Great for Scottish football” is the cliched cry. In truth, this is great for two clubs. Those who sit with calculator in hand as matches are played out tell us the Old Firm’s efforts this season could soon lead to a tangible improvement in their country’s coefficient standing. This season alone, Kilmarnock were knocked out of Europe by Connah’s Quay Nomads and Aberdeen were halted by Rijeka (who didn’t make the group stage either).

No Scottish side other than Rangers and Celtic have made the proper element of European competition since season 2007-08, with the list of opponents who have delivered such scenarios infamous. Scottish Premiership sides can have as many cracks at Europe as they like; there is precious little evidence of them being able to seize upon it.

In economic terms, Celtic and Rangers don’t remotely reflect Scottish football. These are clubs with staff bills of £60 million (€71.9 million) and £40 million (€48 million) in a league where 1,500 people attended last weekend’s visit of Kilmarnock to Livingston. The annual salaries of Steven Davis or Scott Brown are equivalent to the entire first-team squads of these clubs. Rangers can spend £7 million (€8.4 million) on Ryan Kent, a figure higher than the annual turnover of seven teams in their league.

There is a recurring sense this season that Scotland’s top flight is generally weak. The byproduct is a gap at the summit of the table, as the Old Firm readily separate themselves from the rest. Rangers and Celtic encounter little resistance.

The more salient point relates to where, precisely, Rangers and Celtic believe they should rank. Surely it is no leap of faith to suggest these historically huge clubs must hurtle towards the last 32 of the Europa League as a bare minimum?

A glance at the unseeded teams for Monday’s draw shows APOEL Nicosia, Getafe, Ludogorets, Brugge, AZ Alkmaar and Olympiakos alongside Rangers. Celtic have Malmö, LASK Linz and Braga for seeded company. None of this feels disproportionate; or if it does, this would be in the favour of the Scottish clubs, who merrily portray themselves as global powerhouses.

Spreadsheets can be produced to illustrate how the Old Firm have been squeezed out of transfer markets – and, as a consequence, elite competition – but surely their glass ceiling isn’t now so low that progressing through the Europa League post-Christmas is worthy of party hats and balloons.

Rangers have the mitigating factor of financial implosion in 2012, even if recovery from that took longer than spend should have dictated. Gerrard, who has signed a new contract to 2024, has been handed funds his immediate predecessors could only dream of. How valid this approach is may be for another day but it is difficult to make the case that Rangers’ performances in Europe are somehow a vast elevation on assumed status.

Celtic, in turn, enjoyed such vast domestic leeway when Ronny Deila and Brendan Rodgers were in office that they should have established themselves as a regular and credible European force long before now. Instead, and this is an affliction distinct to the Old Firm, staying one step ahead in Scotland was the prevailing motivator. That nobody elsewhere particularly cares about that has been emphasised by Rodgers’ soaring status within 10 months at Leicester City.

The Europa League has clear value to clubs in countries such as Scotland. Bluntly, it feels as if this matters more to them. But when the bigger nations – and finest teams – are jousting in the Champions League it would be depressing if outcomes such as those achieved by the Old Firm are sufficient for wild celebration. Less is more, in this instance.