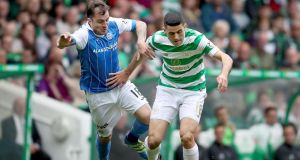 Callum McGregor stepped off the bench to salvage a point for Celtic in a hard-fought 1-1 draw against St Johnstone at Parkhead.

Celtic’s unbeaten run in the Premiership, which now stands at 43 games, was under threat until substitute McGregor struck after 79 minutes to cancel out Steven MacLean’s opener.

MacLean took advantage of a poor clearance from Craig Gordon to put the visitors ahead six minutes before half-time – scoring his 50th goal for Saints in the process.

They were eventually rewarded when McGregor, a 61st-minute substitute, slotted the equaliser with 11 minutes remaining.

Scott Sinclair and Mikael Lustig both hit the woodwork for Celtic but both sides were forced to relinquish their 100 per cent starts.

Aberdeen took full advantage with a thrilling 4-3 win at Partick Thistle to send them to the top of the table.

Ryan Christie put the Dons in front after five minutes with a cool finish from close range before Chris Erskine equalised moments later.

Alan Archibald’s side then took the lead in the 13th minute when Kris Doolan stabbed home a Blair Spittal corner, only for Kenny McLean to make it 2-2 from the penalty spot three minutes before half-time after Christie had been pushed in the area by Stuart Bannigan.

Scott Wright briefly gave Aberdeen the lead at the start of the second half with a fine strike but, within two minutes, Niall Keown headed in Spittal’s corner for Thistle.

Dubliner Adam Rooney secured the win for the Dons, though, by heading home Christie’s cross with six minutes remaining before Keown was sent off for a second bookable offence.

Killie had lost all three of the games in the Premiership but an own goal from Louis Longridge and Lee Erwin’s second-half lob seemingly set them on their way to victory.

However, Giannis Skondras fired home for Accies in the 71st minute and Crawford converted from the spot with two minutes left to secure a share of the spoils.

Kyle Lafferty handed Hearts the lead on the half-hour mark with a low 25-yard effort but Ryan Bowman levelled with a diving header for Well seven minutes later.

The hosts then took the lead three minutes before half-time through Moult, who curled superbly into the top corner from 20 yards.