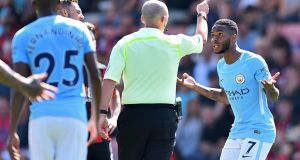 Manchester City’s Raheem Sterling reacts after being sent off by referee Mike Dean after receiving a second yellow card for going into the crowd to celebrating his injury-time goal against Bournemouth. Photograph: Glyn Kirk/AFP/Getty Images

Manchester City boss Pep Guardiola has called for an explanation for the red card shown to Raheem Sterling after he hit an injury-time winner at Bournemouth.

The England winger saw his last-gasp effort deflect in off Andrew Surman to seal a dramatic 2-1 win for City in a finish captain Vincent Kompany described as “absolute madness”.

Sterling’s joy was relatively short-lived as referee Mike Dean showed him a second yellow card for celebrating with the jubilant away fans.

Guardiola looked like being frustrated for the second time in a week following Monday’s draw at home to Everton – a game in which Kyle Walker was also sent off in controversial fashion.

But after seeing Charlie Daniels give Bournemouth the lead with a stunning strike, Gabriel Jesus levelled before Sterling provided the late drama.

Guardiola, however, was left perplexed at Dean’s decision to dismiss the winger, who also grabbed the late leveller against the Toffees.

Asked if he knew why Sterling had been sent off, the former Barcelona boss replied: “It is a good question. I would like someone to comment, if you cannot celebrate with the fans the best solution is not to invite the fans. You can imagine how happy he is, how happy the fans are.

“We won, If we had not won or lost I would not have made the argument but I would like someone to tell me that.

“Teams who always have 65-70 per cent possession always have the player sent off, perhaps someone can explain that to me one day.”

Guardiola also felt Bournemouth defender Nathan Ake should have seen red in the first half but the Dutch defender was only booked for a trip on Jesus.

“I would like them to explain about that as well,” he said.

“They told me it was not a clear action but he was the last man on the pitch.”

Daniels produced a ferocious strike off the crossbar from a narrow angle, but Jesus stabbed home from David Silva’s wonderful through-ball to equalise.

And after City grabbed the winner amid a frenetic finale, Kompany told Sky Sports: “It is absolute madness.

“I watched [Daniels’s goal) back at half-time and said ‘if we are going to concede goals like this, then just focus on scoring’ because it was just an unbelievable goal, from an angle as well that I thought was impossible.

“It goes to show that no matter how much you dominate the game, anything can happen at any time. What a strength of character to hang in there and finish it like we did.”

Bournemouth remain without a point from their opening three league games despite a strong showing here.

Eddie Howe reverted to a back three in an attempt to hold off City’s array of attacking talent and they came so close to doing so.

In the end, however, it was another day to forget for the Cherries boss, who nevertheless praised the display of his side.

“Really pleased with the players today,” said Howe. “A really dogged performance, disciplined and with a lot of heart.

“We had our chances to win the game so it is hugely frustrating.”

Bournemouth’s players and supporters were unhappy at full-time as Sterling’s strike came seven minutes into stoppage time despite only five being signalled.

Howe was more upset about what he considered a soft free-kick awarded against substitute Lys Mousset.

He also had a touchline altercation with Guardiola as City did not return the ball to Bournemouth after they kicked it out of play for Benik Afobe to receive treatment.

“We were disappointed that we didn’t get the ball back into our goalkeeper’s hands or feet from a throw-in,” he explained.

“The players came off the pitch giving everything, the players are disappointed and that was much more like Bournemouth.

“We have been given some harsh lessons by [City] previously, they were good experiences for us to go through.

“The first season in the Premier League was an eye-opener and that was the closest wee have been to them.”

Howe also said he was not keen to see players dismissed in the manner of Sterling’s sending-off.

“My emotions were the polar opposite to his so it is difficult to see how he is feeling, but no-one wants to see red cards in moments like that,” he said.