Spain’s FA, players’ association must put past conflicts behind them to strike pay deal 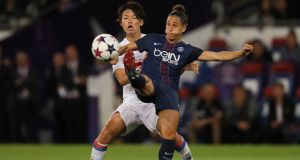 Saki Kumagai of Olympique Lyonnais and Veronica Boquete of PSG in action. Vero moved to PSG after criticising the conditions of the women’s game in Spain. Photograph: Matthew Ashton/AMA/Getty Images

International breaks always bring the same things: fans fighting over missing their beloved league, Sky struggling to promote Kosovo vs England as Super Sunday and the constant struggle as an Irish fan. But courtesy of the new movement to bring women’s football up another level, the international break provides a window of opportunity for the game.

Last weekend the Women’s Super League in England saw over 74,247 fans arrive across the country to see their women’s team. Anfield hosted its very first Merseyside Derby, which Everton won, but the North London Derby provided the most excitement when 38,262 fans packed into the new Spurs stadium to check out whether North London would remain red (spoiler alert: it did).

In any international break, various FAs are provided with the chance to promote their women’s teams when the domestic men’s league would generally take all the headlines. The French FA gave Olympique Lyonnais and rivals Paris St Germain a headline slot at OL’s stadium. The return? A chance to see some international stars, watch two of the best go at it in a stadium with an immense atmosphere. Sure enough, 30,661 turned up to Parc Olympique, setting a new league record.

But, in another corner of western Europe, a football was not kicked throughout the country. In Spain, the women’s players and players association decided this was the time to drop their boots and keep the gates closed.

On October 22nd, over 189 representatives from teams arrived at a meeting to start negotiating a new collective bargaining agreement. The players and players’ association were adamant on what they wanted: The AFE, the players’ association, wanted an increase in minimum salary from €16,000 a year to €20,000. So far, that was the easier of terms for the clubs. But the biggest issue has been the failure to reach an agreement on part-time contracts. The players demanded part-time contracts have a minimum salary of €12,000, 75 per cent of the full-time salary. The clubs argued it should be 50 per cent, or €8,000.

The clubs and the league said no. So, 189 representatives were put to a ballot, and the question was simple: strike or no strike? A resounding and overwhelming 93 per cent decided to go on strike and abandon a whole weekend of games.

The strike was destined to get messy in a few areas. One unnamed club, for example, told media and the league that 90 per cent of their squad actually wanted to play on, irrespective of the strike and what AFE had instructed players. As well as that, some teams were supposed to travel for away games as the strike didn’t begin until midnight on Friday/Saturday morning.

So, while other leagues and teams were preparing for another memorable weekend in terms of attendances, audience figures and general promotion of the women’s game, Spain was preparing for a contrasting historic weekend. No players, no games, one strike and one collective bargaining agreement.

At stages, the strike didn’t look to be going ahead. Due to the midnight clause in the striking agreement, some teams were forced to travel despite no intention to even play. Two teams were Sporting de Huelva and Granadilla (UDG Tenerife). Granadilla ironically could not get to Barcelona for their game against Espanyol, as their flight was delayed due to a technical problem. Sporting de Huelva still had to travel to Valencia, to ensure their team was given the opportunity to play the game, despite no intention from either squad to do so.

In total, eight games were subsequently cancelled due to the strikes, and a statement was made across Spanish football for the footballing governing bodies to take the women’s game seriously. The players are asking for simple things: a secure salary, decent working conditions, injury cover and some form of maternity cover. Real Sociedad goalkeeper, Mariasun Quiñones, said it best when she spoke with Spanish media, “I’m not a part-time football player, I’m a full-time player. We can’t live on €8k a year. People need to know we’re not asking for crazy things, just the minimum working conditions.”

Usually, the RFEF, Spain’s FA, is quick to clamp down on any revolting actions towards it. Vero Boquete, one of the world’s best midfielders, sensationally left Spain after she spoke out. Vero sought better conditions elsewhere and has yet to come back to Spain. Top Spanish striker Jenni Hermoso also left Spain for better conditions and pay at PSG, only to return to Barcelona, her childhood club, to fight for future generations.

RFEF, Primera Iberdola and all other football governing bodies have an opportunity to bring women’s Spanish football into the 21st century. But, with past conflicts and old wounds still not healed, it will be incredibly tough for the AFE and RFEF to sit down as one and organise a collective bargaining agreement that is equal and fair.

Michael Walker: Ian Baraclough staying on trend, from Sligo to Windsor Park 06:00
Matt Williams: Six Nations must recognise the desire for revolution outside Europe 06:00
Sport crosses its fingers yet again as ministerial merry-go-round gets another spin 06:00
Aidan O’Brien targets historic eighth Epsom Derby win with strong hand 06:00
Leicester seek to flatten their dismal curve and end season on a high 22:30

1 Matt Williams: Six Nations must recognise the desire for revolution outside Europe
2 Monica Seles: The warrior queen who could have been the best ever
3 Aidan O’Brien targets historic eighth Epsom Derby win with strong hand
4 Séamus Power rockets into share of clubhouse lead in Detroit
5 Leicester seek to flatten their dismal curve and end season on a high
Real news has value SUBSCRIBE
Crossword Get access to over 6,000 interactive crosswords