Schmidt wanted Samoa match called off due to state of pitch 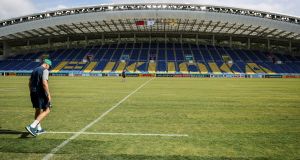 Joe Schmidt inspects the pitch during the Captain’s Run ahead of Ireland’s clash with Samoa in Fukuoka. Photograph: Dan Sheridan/Inpho

Former Ireland coach Joe Schmidt has revealed he tried to have the final pool game at the Rugby World Cup against Samoa called off before the match concluded.

In his book, Joe Schmidt: Ordinary Joe, which goes on sale on Thursday, Schmidt says this was for reasons of player welfare, such were his concerns over the state of the pitch at the Fukuoka Stadium.

His request was refused by the match referee, Australian Nic Berry.

Schmidt had initially been alarmed at the state of the re-laid pitch at Fukuoka Stadium during Ireland’s captain’s run on the day before the Samoan game.

“Segments of the turf could be lifted up and were unstable at the edges, which may cause issues tomorrow,” he writes.

As well as the sending-off of Bundee Aki, Ireland’s 47-5 win was not helped by a surface that cut up badly. “Our concern as the match continued was player safety, with the pitch lifting up in places and uneven in others. Fine gravel was seeping up through the seams and a number of players finished with abrasions.

“We discussed the state of the pitch in the coaches’ box and sent a message to (Ireland team manager) Paul Dean to request that the match be called off early. Deano approached the match manager and a message was conveyed onto the referee, via the fourth official.”

“The referee chose to continue,” writes Schmidt, “but chatting to the Samoans and the players later, we thought it was incredible that two teams at rugby’s premier tournament had to play on a pitch as badly cobbled together as that one was.”

Ordinary Joe, published by Penguin and written by Schmidt himself, is not an autobiography per se, although the New Zealander delves into autobiographical territory in the first section, which charts his upbringing, playing career and first forays into coaching in his home country.

Another section is devoted to his time in Europe with first Clermont Auvergne in France, and then with Leinster. The second half of the book is divided between diaries of the 2018 year which saw Ireland win the Grand Slam and beat New Zealand for the second time, and of 2019, which culminated in a World Cup quarter-final defeat by the All Blacks.