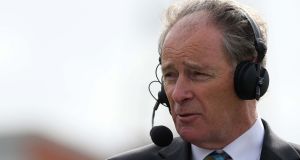 Brian Kerr: “Nothing replaces the buzz of being involved in a match, the tension of living or dying by the result. I always loved that.” Photograph: Donall Farmer/Inpho

How was your lockdown, Brian? “Well, I spent a lot of time doing painting and decorating, like most people. I ended up with a PhD in fence and shed painting. I painted walls that had never got paint on them before, and fixed sheds that were on the verge of collapsing. I read a fair bit. And walked a good bit as well. I never experienced anything like it in my lifetime – there was no sport on!”

Did you try to make sourdough? “No. But I made toast.”

For a man who told Virgin Media’s Tommy Martin, in the first part of ‘Brian Kerr – A Life In Football’, that his days have been a “blur of sport” since he was a child, his passion for it still limitless, they were, indeed, the strangest of months.

“Did you see Argentina beating New Zealand in the rugby a couple of weeks ago? That was great. And the hurling at the weekend? Brilliant. And I got a text from my old Faroe Islands kit man the other night, sending me the link for their cup semi-finals. So I ended up watching them on my phone. And seeing some of the players from my time there. Atli Gregersen, the big centre half, is still going!”

From a famine to a feast? “Exactly.” One thing he won’t be watching, though, is ‘Brian Kerr – A Life In Football’.

“I don’t like talking about myself and I don’t like watching anything that I’m on. I might be over critical, I don’t know. I just wonder, why would anyone be interested in my life?”

“I mean, it was enjoyable to do, it’s not something that I’d done before, and Tommy is great. But trying to make it entertaining for everyone else was a bit of a task. I remember everything with a fondness, how blessed I was to be given all the opportunities I had – but why should it interest anyone else?”

Something else he has avoided is Champagne Football, the book about John Delaney’s time at the helm of the Football Association of Ireland, as well as RTÉ’s The John Delaney Story, in which Kerr said: “The only person I can compare him to in my lifetime is Donald Trump. and that’s probably unfair to Trump”.

“I just didn’t want to go back there again, to your man and all that time,” he says. “I suspect the book and the documentary just confirmed what I knew about them all.”

Were the closing days of his time as Republic of Ireland manager, and his relationship with Delaney, the worst of times?

“In football, in sport generally, and in all aspects of life, there are lots of ups and downs. As I said to Gerry Thornley many, many years ago, ‘the way I look at it is, enjoy the good days because the bad days are poxy’. Gerry quoted me. It was probably the first time the word poxy appeared in The Irish Times.

“But yeah, the end of my time as Irish senior manager, the uncertainty, the lack of support from the FAI, was a dark time. I almost sensed that they were pleased we didn’t win the last match [against Switzerland in the 2006 World Cup qualifying campaign] when we needed to. That wasn’t nice. So, yeah, it was dark.

“Mentally, I had never been in that situation before, where I didn’t have the backing of the people I was working for. I was frustrated by their agendas, it was almost like they were trying to spite you rather than trying to make things easier. There was no doubt in my mind at the time that they – and not just him – were spinning negative stuff against me. I’d read stuff in the papers and think, ‘where the f**k did that come from?’”

It was all about removing people who were viewed as a threat to the regime. It didn’t matter whether they were good for the game or not

“It was all about ego, gaining power and maintaining it. And they made a lot of poor decisions after I left, got rid of people who were making a difference to the game, to the League of Ireland, emerging talent, structures, systems and so on.

“It was all about removing people who were viewed as a threat to the regime. It didn’t matter whether they were good for the game or not. It was never about football. And anyone who had strong opinions and was prepared to stand up for their principles was generally discarded.”

The contrast with what he describes as the happiest period of his life, working with Liam Tuohy in the Irish underage set-up, couldn’t be sharper, and he chuckles loudly when he recalls what Tuohy told him about his relationship with the FAI big wigs when he was the senior Irish manager: “We have a great mutual respect – I hate them and they hate me”.

“That period between ’82 and ’86, pre-Jack, working with Liam, was the most enjoyable of all that I had in football – it was great fun, it was new, it was an adventure, and we got to travel to places, like Russia, Iceland and Finland, where, back then, no one ever went.

“And through the years, out of poxy things came good things, like the the opportunity to go to the Faroes where I had a very happy time. A difficult time football-wise, trying to win matches, but a unique adventure in a very beautiful, isolated place. I was blessed to have that time there.

“And I’m blessed now to have my television and radio work. Nothing replaces the buzz of being involved in a match, the tension of living or dying by the result. I always loved that. Even as a kid I lived all week thinking about the last result and how the next one would go.”

“But there’s a tension, too, about doing a live television and radio show, trying to get it right and not say anything too stupid. Trying to see a game correctly and transfer some information to people. That’s a bit of a responsibility as well that I take seriously. I respect the role I’m given, and I give it proper time and preparation. I enjoy it. I’m grateful for the job.”

Part one of Brian Kerr – A Life In Football airs on Virgin Media Two on Wednesday, December 2nd, at 10.15pm.