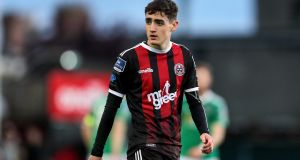 Bohemians couldn’t quite take the chances they created against PAOK in the Uefa Youth League at Dalymount Park on Wednesday evening and will need to get a big result in Greece in three weeks if they are to progress to the competition’s second round.

The Dublin club led very early on through Jack Moylan and created more than enough chances to win the first leg, but having levelled through Antonis Gaitanidis after just 10 minutes, the visitors headed for home in slightly the stronger position ahead of the second leg.

Manager Craig Sexton will feel his players should have been able to capitalise on their dominant spells but there was particular disappointment for Dawson Devoy whose first-half penalty, awarded after Ross Tierney had been bundled over inside the area, was well saved by Christos Talichmanidis.

Brandon Bermingham and Moylan both went close to restoring the home side’s lead after the break but the locals couldn’t quite find the target and though there was plenty of entertainment for the crowd of 1,227, Bohemians will have to do well away if there is to be more foreign visitors to Dalymount in this season’s competition.

“We’re a little bit disappointed that we didn’t take the chances and put the game to bed as we seemed to be in their half and their box a lot,” said Sexton afterwards. “But I’m proud of them. They’ve really shown tonight where they are at in terms of their development. We passed it very well and the boys stuck to the game plan.

“We dominated the game, we kept their keeper fairly busy. The amount of openings and chances we created during the game was unbelievable so we are delighted with that.

“I thought we had them in the areas we wanted them. If the peno had gone in, we could have possibly gone on and pushed on to win the game.

1 Real Madrid crash out to relentless Manchester City performance
2 Radically shortened intercounty season to be discussed
3 The game they loved so well: How cricket united Hume, McGuinness and McCann
4 Sligo meeting abandoned after four races due to safety concerns
5 Lyon make Juventus wait another year despite Ronaldo double
Real news has value SUBSCRIBE
Crossword Get access to over 6,000 interactive crosswords