Blow for Ireland as Megan Connolly to miss Greece qualifier 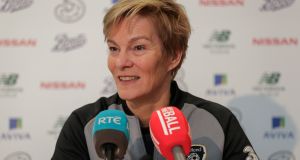 Republic of Ireland manager Vera Pauw will be without Megan Connolly for this week’s clash with Greece. Photograph: Brian Reilly-Troy/Inpho

Brighton midfielder Megan Connolly has been ruled out of this week’s European Championship qualifier against Greece after sustaining a shoulder injury in a fall during training last week.

Ireland manager Vera Pauw said an MRI scan has since shown that the problem is serious enough to rule her out of Thursday’s game in Tallaght (kick-off 7.15) and, like Jessica Ziu and Niamh Reid Burke, Connolly has now left the squad.

Pauw must cut one more player from the remaining group of 24 ahead of the game but says he is holding off until she is clearer about the fitness of striker Rianna Jarrett who scored twice on her debut, also for Brighton, against Crystal Palace last week.

“Rianna is only getting back,” said Pauw, “but we think she will be ready for 70 minutes.”

Newly declared Kyra Carusa, an American born striker who is currently in preseason at Danish club HB Koge, is available for the game but Nicole Douglas, one of two former England youth internationals to declare for Ireland in recent months, has not yet completed the necessary process while Maegen Doyle, is out with a hamstring injury.

Pauw has a strong squad otherwise for a game she describes as “crucial” if Ireland are to secure second place in their qualifying group and, at the very least, secure a spot in the play-offs for next summer’s finals in England.

“If we draw (against the Greeks) it’s not over but it becomes very difficult,” she says.

Around 5,000 tickets have been distributed for the game with a much higher proportion sold than was the case for Ukraine last year when the association gave away enough tickets to declare the game a sell out, only for many of those who had tickets to not use them on the night.

The strategy this time has been to raise prices slightly for adults but provide family packages (two adults and two kids for €20) in the hope that people will feel more of a commitment towards going and having already sold more tickets than previously, the association is hoping to beat the previous record attendance for a women’s game of 5,328.

“It’s good because people who have bought tickets show they believes in us and that’s an important boost for us,” says Pauw. “During the game I hope they will be loud and really boost us to another level because that’s what we will need.”

Pauw expressed confidence that the team’s schedule, which includes a trip to Montenegro next week, will not be disrupted by coronavirus as things stand although she said the FAI is taking advice on an ongoing basis from the HSE with regard to what precautions to take. “We just go by the advice from the Health Service,” she said, “but for the moment we don’t do anything differently.”

1 Former France and Stade Francais winger Dominici has died aged 48
2 Owen Doyle: Ireland suffered from officiating of the breakdown
3 Gerry Thornley: Ireland don’t want to box themselves into a corner
4 No further players to be called up to Ireland squad to face Georgia
5 Kevin McStay: Maybe a knockout All-Ireland Championship is the long-term solution?
Real news has value SUBSCRIBE
Crossword Get access to over 6,000 interactive crosswords