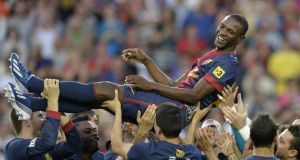 A file photograph of Eric Abidal from June 2013. Barcelona have denied that they illegally bought a transplant liver for their former defender. Photograph: Luis Gene/AFP/Getty Images

On Wednesday the online Spanish newspaper El Confidencial claimed that phone calls intercepted by police showed Rosell implicitly admitting that he had “bought an illegal liver” for the player, who was found to have a tumour on his liver in 2011.

Abidal, who is now the club’s director of football, has always maintained that the liver was donated by his cousin Gerard. He had transplant surgery in 2012 at the Hospital Clinic de Barcelona, which has said it followed “the letter of the law” with his transplant.

According to El Confidencial, however, Rosell’s calls raised doubts over the donor’s identity and were passed to a judge who was investigating allegations about the liver having been purchased illegally.

Spain’s national transplant organisation said it had no evidence to suggest any wrongdoing in the case, but had decided to launch a joint investigation with the Hospital Clinic de Barcelona and the Catalan transplant authorities, as a precautionary measure, in line with its “zero tolerance” approach to organ trafficking.

“According to the information we have, Eric Abidal’s donation and transplant process was conducted in accordance with the relevant legislation and the usual clinical protocols governing live organ transplant,” it said.

The club issued a statement later on Wednesday in response to the claims.

“In light of the reports published today about the transplant undergone by the current technical director of the first team, Eric Abidal, FC Barcelona emphatically denies that there was anything irregular about it, as have both he and the directors of the Hospital Clinic de Barcelona,” it said.

The statement said El Confidencial’s report had also left out the “key fact” that the investigation into Rosell’s alleged purchase of the organ had been shelved by a Catalan court in May last year.

The club said it deeply regretted “the lack of rigour in the reporting of such a sensitive issue” and wished to underline its commitment to both Abidal and the foundation he established five years ago to help children with similar medical problems.

In a separate statement the Eric Abidal Foundation also categorically denied the reports, insisting that “the entire transplant process was conducted according to established protocols and procedures”. The charity said Abidal was grateful to everyone involved in his medical treatment, including his cousin Gerard.

Rosell was arrested in May 2017 as part of an investigation into alleged money-laundering.

A week ago, a Spanish judge ruled that Rosell, his wife and four others, would stand trial on charges of money laundering relating to the sale of TV rights for Brazil matches.

It is alleged that Rosell, a former Nike executive, and his wife laundered nearly €15 million from TV deals and another €5 million from a sponsorship contract between the sports clothing company and Brazil.

Rosell has denied any wrongdoing.

1 Connell losing touch with the club championship is the real tragedy of Normal People
2 Ghosts and goalposts: The soul of street football in Dublin’s Gloucester Diamond
3 Shane Ryan: Shark attacks and gruelling shifts on a Covid-free Atlantic mission
4 Rugby clubs in crisis: ‘I fear a lot of players won’t go back playing at all’
5 Karolina Pliskova: Male players complaining about women’s prize money are ‘super weak’
Real news has value SUBSCRIBE
Crossword Get access to over 6,000 interactive crosswords