Time to judge sports analysts on their merits rather than gender

Women have had difficulty getting roles in sports broadcasting. That needs to change 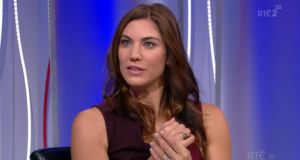 Introducing US World Cup winner Hope Solo to the RTÉ panel, for me, is a massive win for the broadcaster.

A few months ago, my brother Danny called me in an absolute panic. His panic is sports related – or he’s ringing to tell me that they’re looking for a boxing announcer and I would definitely be perfect for the job. (Spoiler alert – I am not ideal for a ringside announcer.) But, he rang to tell me he was watching Soccer Republic on RTÉ and there was a female commentator. He had no issue with it but he wanted to show me so I’d believe it for myself.

Fast forward to the World Cup, and he’s texting me about Eni Aluko, Alex Scott and Vicki Sparks.

“It definitely takes getting used to, but it’s cool when they know what they are talking about!” My brother is not the most progressive person I know (sorry, Danny), but he, just like me, believes you should be judged on merit rather than gender.

The conversation regarding female analysis and commentary is such a strange one. Louise Quinn and Stephanie Roche flew the flag well in Ireland. They clearly had their research done, and they spoke well on everything that was put to them. Isn’t that the standards all commentators should be held to?

Brian Kerr, admittedly a favourite of mine, is praised for having a passion and talking lovingly about the beautiful game, yet when a woman does it they are either trying too hard or they don’t fit our image of an expert panel. And, hey, a female voice is annoying and we should mute it . . . not looking at you, John Terry.

It shouldn’t be out of the ordinary to do your job well as a World Cup commentator or pundit. The qualification shouldn’t just stand at being an ex-footballer or having a bunch of international caps. Sure, it helps but the obligation is now on broadcasters to look beyond the name and start expecting more from their stars. This is the biggest spectacle and show on Earth and you will be sniffed out as a fraud very quickly.

Aly Wagner is a commentator in the United States who has had to deal with backlash. Wagner has played in two World Cups so, chances are, she knows her stuff. She got the job because she was good, Fox Sports liked her, and she spoke with passion and flair.

The other thing – being a woman – only came to the forefront when she went live and accidentally called Dele Alli, Dele Ollie. Cringe, but it is kind of ironic we praise Kerr here in Ireland for the same thing. It’s not a bad thing to slip up occasionally, you move on. But to have it thrown in your face to prove you don’t know the game is annoying.

It’s obvious women have had a difficult path getting roles in sports broadcasts beyond studio hosts and sideline reporters. Match commentary and analysis is universally male dominated, but the times are changing.

We have seen the Sunday Game introduce female panellists and how the Women’s Rugby World Cup analysis from Fiona Steed, Lynne Cantwell and Rosie Foley was hailed for demonstrating the essential basics.

Introducing Hope Solo to the RTÉ panel, for me, is a massive win for RTÉ. If anybody can bring in a World Cup winner, two-time Olympic gold medallist and top-class goalkeeper, the broadcaster is hailed for such a coup. Yet, when Solo arrived, there was a mixture of “sure what would she know”, this is “political correctness gone mad once again”.

It’s not PC gone mad. It’s acknowledging that women can be as opinionated, well researched and an expert. Solo is one of the most opinionated and coolest women I know. She’s not afraid to speak her mind and even when I don’t agree with her, it’s admirable the passion she has to break the glass ceiling and be a game changer.

For far too long, I was accustomed to seeing women on the sideline, just waiting there awkwardly for a player to spout some PR machine answer on how the game went. Now, I see women having an opinion, being allowed to express themselves and be put on the same pedestal. Visibility is important, but being visible for the right reasons is more important. I was raised from the old-school parents where if you’re good enough, you’re accepted, irrespective of the other stuff. It’s time the world, both sporting and non-sporting, move on too.