Waterford get the better of Sligo after first-half goal blitz 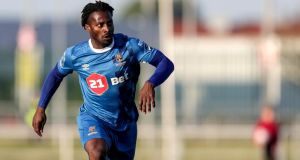 All five goals came in the first half as Waterford earned a vital three points at the Showgrounds on Saturday night.

Stanley Aborah, John Martin and Bastian Hery all scored for the visitors to cancel out goals from Adam Wixted and Séamus Sharkey for the hosts.

The goals arrived as early as the fourth minute as Stanley Aborah netted past a stationary Mitchell Beeney from a free-kick harshly awarded against Jack Keaney.

It was 2-0 to the visitors 15 minutes later from another set-piece, as David Webster’s free was headed on by Ishmail Akinade for John Martin to fire low in to the net from inside the area.

But Rovers finally woke up to the game six minutes later, as David Cawley’s brilliant through-ball released Adam Wixted for a superb finish past Matthew Connor.

And it was all-square minutes later as Regan Donelon’s in-swinging corner just needed a touch from the excellent Sharkey to guide the ball to the side of the net.

But Waterford were not long getting what proved to be the winner, as Bastian Hery seized upon a half-cleared free-kick, and stabbed the ball to the net three minutes later.

Great Escapes: A revealing insight into the big show of professional sport

Mick’s millennium: McCarthy clocks up his 1,000th game as manager 06:00
The interpros give players a chance to prove the coaches wrong 06:00
Pro14: Munster-Connacht rivalry set to take on a sharper edge 06:00
Indoor Championships draws record number of athletes despite pandemic 06:00
Michael Dempsey: Elite intercounty Gaelic games is not the heartbeat of GAA 06:00