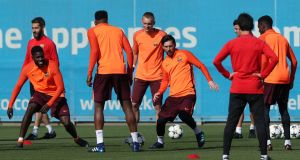 “Welcome Romans, 100,000 gladiators await you,” warned Barcelona in a preview video ahead of their Champions League quarter-final first leg against AS Roma on Wednesday.

One warrior stands head and shoulders above the rest.

Lionel Messi is fit again and expected to start against the Italian side after rising from the bench to rescue Barcelona a point in a 2-2 draw with Sevilla on Saturday.

Messi missed Argentina’s friendlies during the international break with muscular problems, a 2-0 win over Italy and a humiliating 6-1 thrashing by Spain in Madrid.

Thrown on by Ernesto Valverde just before the hour mark as Barcelona trailed Sevilla 2-0, Messi turned the tide in his team’s favour and drove home an 89th-minute equaliser from outside the area.

“He didn’t start the game as a precaution,” coach Valverde said.

“We think he will be fine for Wednesday but we will see how he feels after tonight’s effort.

“Of course, he’s an important player. He makes a difference every time he touches the ball.”

The last time Roma faced Barcelona was in the Champions League group stage in November 2015, with the Catalans registering a thumping 6-1 home win over the Italians.

Messi made his return from a two-month injury layoff in that game, running the show and scoring twice, as well as setting up Gerard Pique.

Luis Suarez, who also struck twice against Roma in that match, was pleased with the team’s attitude against Sevilla.

“It’s to Messi’s credit that he keeps on demonstrating (his class),” the Uruguayan forward said. “But the work of the whole team, to keep going and not give up, is what stays with me.”

Barcelona looked lost at Sevilla until Messi arrived, especially without Sergio Busquets anchoring the team and controlling the game.

The Catalan holding midfielder is back in training after a toe injury and could also start as Barcelona welcome Roma to their Colosseum for the first leg.

“Andres Iniesta, our Michelangelo, Leo Messi, our emperor,” Barcelona declared in the video.

While veteran playmaker Iniesta’s brush strokes in midfield paint the path, it is only with Messi leading the charge Barcelona can be confident of putting Roma to the sword and taking another step towards a potential treble. – Reuters