Arsenal cruise past CSKA Moscow to set sights on semi-finals 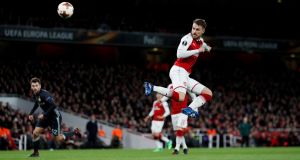 Aaron Ramsey timed the run to perfection but what he produced next would go down as the defining image of an enjoyably serene evening for Arsenal. Darting onto Mesut Özil’s lofted pass, Ramsey jumped and, with the outside of his right boot, flicked a volley over the CSKA Moscow goalkeeper, Igor Akinfeev, and into the net.

The moment of magic gave Arsenal a 3-1 lead after 28 minutes of a quick and purposeful first-half performance and set them fair for a place in the Europa League semi-finals – their shot at redemption in an endlessly trying season.

Ramsey had opened the scoring and things would get even better for Arsenal. Arsène Wenger had preferred the fit again Alexandre Lacazette to Danny Welbeck up front and the striker, who had scored his team’s second from the penalty spot, made it four before half-time with a precision finish.

Wenger had said, with glorious understatement, that there was “some extra pressure on the team to do extremely well in this competition” but they did not appear to feel it, save for a little wobble upon Aleksandr Golovin’s equaliser.

This was a convincing attacking display, underpinned by Özil, who fired the move for Ramsey’s first goal and claimed the assist on the other three. Wenger has never won a European trophy. He is edging towards a decent shot.

CSKA carried encouraging form to London. Since the resumption of the Russian season in mid-February, they had not experienced defeat. Yet the Arsenal support had seen them lose at home and away to Manchester United in this season’s Champions League group phase, and at home and away to Tottenham in last season’s competition. There are no easy games at this stage. However, the mood had been that a bad result was unthinkable – for so many reasons.

The season was on the line once again for Wenger and his team, and the manager selected his strongest available side, who included Petr Cech ahead of the regular cup goalkeeper, David Ospina. The joke was that Ospina was told of his ankle injury after training the day before. The conspiracy theorists were forced to note Ospina was not on the bench.

Wenger’s team bristled with attacking intent and Arsenal started as though they meant business, with Henrikh Mkhitaryan banging a shot into the side-netting and Ramsey seeing a goal disallowed for offside, following Özil’s pass. The decision was tight.

Ramsey would have the ball in the net for real after 10 minutes. Özil zipped a pass out wide to Héctor Bellerín. The right-back’s low cross was made to measure for Ramsey and he swept home.

Arsenal were shaky at the back, leaving spaces and riding their luck, at times. Ahmed Musa had raced clean through on five minutes only to be pulled back by an offside flag, which looked harsh, while the defending that prefaced the CSKA equaliser featured a shanked clearance and Laurent Koscielny bundling into Aleksandr Golovin on the edge of the area. The midfielder picked himself up to curl a precision free-kick into the top corner. For a moment, there was panic and when Musa beat Granit Xhaka, he shot wastefully wide of the near post.

Arsenal’s game clicked gloriously at the other end and the CSKA back three of the Berezutski twins and Sergei Ignashevich came to look like every one of their combined 108 years. The penalty was a decisive moment. Özil looked to have overrun the ball and he was stumbling when Georgy Schennikov slid in. He got none of the ball but, after Özil went down, it still felt like a soft award. Lacazette finished coolly.

Ramsey’s second was a gem and that of Lacazette was a nice finish in its own lower key way. Xhaka fed Özil and when he crossed, Aleksei Berezutski stretched, creaked and could not cut it out. Lacazette took a touch and drove low past Akinfeev. It might have been five before the interval but Özil lifted a shot high from the corner of the six yard box following Xhaka’s superb ball.

This was Arsenal’s first quarter-final since 2010, when they lost to Barcelona in the Champions League, and much had been made about what kind of crowd would turn up, after the poor recent attendances at Premier League fixtures. The tie was included as part of the season-ticket packages and, although there were no-shows, the empty seats were not too pronounced. It felt broadly similar to the Milan tie in the last 16.

Özil was in the mood and it was one of those nights when he visibly enjoyed himself, flitting from his starting position on the right to caress a stream of killer passes. Mkhitaryan benefitted from one early in the second half only to shoot wide.

Ramsey hunted a hat-trick. He watched a first-time shot deflect past the post while he lifted another over the crossbar. Wilshere looked to have been fouled inside the area by Ignashevich but no penalty was given.

Arsenal ought to have had more. The substitute, Alex Iwobi, crossed rather than shot when well placed while Ramsey rattled a post. Four goals were more than sufficient. – Guardian service