City team bus was pelted with bottles, flare and fireworks as it arrived at Anfield 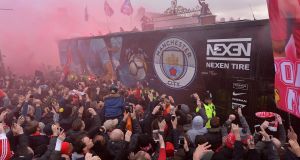 The Manchester City team bus is hit by bottles and cans as it arrives prior to the Uefa Champions League quarter final first leg match against Liverpool at Anfield. Photo: Peter Powell/EPA

Liverpool have been charged by Uefa after Manchester City’s team bus was pelted with bottles and cans ahead of their Champions League defeat at Anfield.

Disciplinary proceedings regarding the setting-off of fireworks, throwing of objects, acts of damage and crowd disturbances will be dealt with by Uefa’s control, ethics and disciplinary board on May 31st.

Despite the incidents taking place in streets surrounding Anfield, Article 16 of Uefa’s regulations about order and security at games states “host clubs and national associations are responsible for order and security both inside and around the stadium before, during and after matches”.

City coach Manel Estiarte posted footage from inside the team bus which shows numerous objects hitting the coach to highlight the “unacceptable” behaviour of fans.

At least one window was smashed on the journey through streets filled with thousands of fans, a number throwing flares and smoke bombs, and a replacement vehicle had to be found the trip home after the 3-0 first-leg loss.

In footage obtained by Spanish television station Gol, Guardiola appeared to be unhappy with the arrangements for their arrival.

Man City coach Manel Estiarte has posted a video from inside the #MCFC bus on the way to Anfield last night. Is this kind of welcome from Liverpool fans just part of the game, or too far? #LFC #LIVMCI #UCL pic.twitter.com/a8REYLQzpl

Getting off the bus in the area under the Main Stand the City boss gave the thumbs up to stewards and said sarcastically in Spanish “thanks for protecting us” and then “Shame”.

Merseyside Police have appealed for anyone with video footage to send it to them at team.incident merseyside.police.uk or contact Crimestoppers.

“We worked very closely with both clubs to plan for last night before agreeing the route of the buses to ensure the teams and public were safe before the match,” said Match Commander Superintendent Paul White.

“Two officers sustained cuts and swelling — one was struck by an object and another suffered glass cut injuries. It is pleasing to hear that nobody else was seriously injured.

“What should have been a celebratory event for thousands of people was spoiled by a number of people who threw bottles, cans and pyrotechnics.

“Their actions will not be tolerated by Merseyside Police and we will do everything in our power to find those responsible and put them before the courts.”

The focus will now inevitably shift, following Wednesday’s events, to the Etihad Stadium next Tuesday, and the plans which are in place to avoid any repeat.

Liverpool, who issued a statement of apology on Wednesday, will not say whether they will take extra steps to ensure the safety of their coach and players, but it is understood they are likely to have talks

on the matter before the match.

“The club doesn’t comment on any additional or exceptional security and safety measures implemented as pertains to its employees,” a Liverpool spokesman said.

Arrangements for team arrivals at the Etihad Stadium are slightly different to other grounds, although both arrive on ‘protected’ routes.

The home coach pulls up outside the main reception for the players to receive an organised and staged blue carpet reception from supporters. The away bus arrives at a separate location some distance away from where home fans congregate and has a private entry into a tunnel under the stadium.

How a visit from his barber helped Kyle Sinckler get back to his best 22:05
Mickey Harte is the new Louth football manager 21:59
Burnley hold out Crystal Palace for first win of the season 19:40
Giroud remains part of Chelsea plans, says Lampard 18:25
Crowds of 4,000 to return to sporting events in England from next week 17:32

1 Mickey Harte is the new Louth football manager
2 The Offload: Ireland are stuck in no man’s land
3 Nicky English: Galway and Waterford face battles with fatigue in All-Ireland semis
4 How a visit from his barber helped Kyle Sinckler get back to his best
5 Every kind of wind imaginable was against Tipperary football - and they came through
Real news has value SUBSCRIBE