Neymar was right on one thing about Man United's VAR penalty 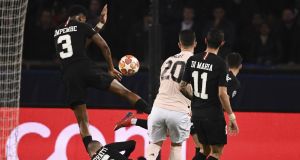 Paris Saint-Germain defender Presnel Kimpembe is struck on the arm by a shot from Manchester United’s Diogo Dalot’s during the game at the Parc des Princes. Photograph: Franck Fife/AFP/Getty Images

The VAR decision that took Manchester United into the Champions League quarter-finals was a good example of why the new technology that will be in the Premier League from next season comes with the capacity to cause more arguments than it actually settles.

Though Neymar’s sweary reaction betrayed an understandable disappointment at Paris Saint-Germain going out of the competition in such a manner in injury time, his point about games being decided by remote officials who are not necessarily in tune with the contest on the pitch was a fair one.

There was no clear and obvious mistake in Paris for a start. Diogo Dalot’s appeal for a penalty appeared as hopeful as the original shot which would surely have cleared the bar but for striking Presnel Kimpembe.

When you are a goal down in the closing seconds of a knockout game you are pretty much going to appeal for anything, no matter how much of a lost cause it may seem. The referee, Damir Skomina, was not surrounded by United players begging for a penalty, because from most areas of the pitch it was not even clear that Kimpembe was inside the area, let alone that the ball had hit him on an arm. But Dalot’s solitary protest must have alerted the VAR panel, who evidently whispered to the official that it might be worth taking a look at the monitor.

In other words this was not a case of an erroneous decision being overturned, which is what most people imagined VAR would be used for, but of a game being refereed remotely, which is a subtly different thing. Skomina did not appear to have arrived at a decision of his own over whether to award a penalty or allow play to continue, he was simply persuaded to go to review.

Whether that counts as progress depends on your point of view, though it could clearly become both irritating and time-consuming for spectators who have paid money to watch events unfold on the pitch to find them being run instead from some invisible television bunker.

Leaving that argument aside, the most obvious aspect of a dramatic finale was that VAR stirred up the controversy. The endless replays answered the question of whether the ball hit the defender’s arm – it clearly did – though offered no practical help over whether or not a penalty should have been awarded. The decision remained subjective; you either consider it a deliberate handball or you don’t, and VAR was unable to prove anything either way.

The situation in Paris was further complicated by a recent Uefa instruction to referees to award a penalty if the ball strikes a hand or arm that is considered to be in a raised or non-natural position.

While the Fifa rule book still contains reference to the offence of handball being the deliberate act of making contact with hand or arm, Uefa referees are now being encouraged to take the notion of deliberate contact out of the equation.

A defender might be trying to get his arms out of the way, as Manchester City’s Nicolás Otamendi plainly was against Schalke a couple of weeks ago, but because he was unable to put them behind his back quickly enough, the arm the ball struck was deemed to be in a non-natural position.

Which of course raises the question of what actually is a natural position for arms. You cannot really play the game with them folded across your chest or clasped behind your back. Was Kimpembe’s arm in a natural position or not? The defender jumped in the air while simultaneously turning his back to the ball. He was attempting to block the shot and succeeded, and though no one could say for certain it was deliberate handball, one could perhaps conclude he was careless to the risk of being penalised.

Though the script for Manchester United’s revival under Ole Gunnar Solskjær continues to be nothing short of incredible there are some aspects of the VAR system that still need looking at before it is wheeled out in every game next season.

Not the technical performance so much – replays are served up fairly smartly now and most people will be happy referees finally have the opportunity to take a second look at contentious incidents – but the grey areas within the laws of the game.

To wit: does it really matter if a forward’s big toe is offside in the build-up to a goal, does it confer an unfair advantage and is it worth holding the game up for five minutes or longer just to get to the truth of the matter?

Similarly, unless a player actually uses his hand or arm to stop a shot, can we not simply forget all the nonsense about natural and non-natural positions and accept that contact may sometimes be unintentional?

There is so much room for debate in these areas that football’s rules and regulations can probably be considered too woolly at present to be assisted on every occasion by VAR.

There is nothing wrong with the system, we just need to have a better idea of what it is we want it to look for. Is every handball a penalty? VAR cannot answer that. It can flag up the alleged offence, though as we have seen that is often the starting point of the argument rather than its conclusion.

While VAR has the potential to be an impressively forensic tool, at the moment it is merely highlighting the discrepancies and areas of interpretation contained within the rulebook.

For any review system to work properly the questions it needs to answer must be in black or white rather than shades of grey. In terms of offsides and handballs in particular, football needs to find a way back to the days when everyone in the stadium understood what decision the referee was supposed to make. – Guardian